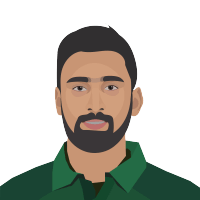 Abdullah Shafique is a 21-year-old top-order right-handed batsman from Sialkot, Pakistan, who is also an occasional right-arm off-break bowler. He was named to represent Pakistan in the U-19 World Cup in 2019. The PSL team, Multan Sultans, drafted Abdullah for the 2018 season. He began his first-class career in December 2019 when he played for Central Punjab in the 2019-2020 season of the Quaid-e-Azam Trophy tournament.

He represented the same team in his first T20 game in September 2020 in the 2020–21 National T20 Cup. In October 2020, the PCB rewarded Shafique for his performance in that tournament by naming him in the list of 22 probables for selection to the national team to play in the home series versus Zimbabwe. He played his first T20I game against the Zimbabweans in November 2020. The same month, the PCB named Abdullah in the 35-member squad to tour New Zealand. In January 2021, Abdullah was included in the Pakistan Test squad to play against the touring South Africans.

Abdullah is yet to play Test cricket.

Shafique has not yet made his ODI debut.

Abdullah set a record as the first Pakistani batsman to score a century on debut in both first-class and T20 cricket. He made his first-class debut for Central Punjab against Southern Punjab in a four-day match played from 2 to 5 December 2019. Central Punjab posted a first-innings score of 597/9 declared. Batting at number three, Shafique shared a 179-run stand for the second wicket with Ahmed Shahzad. He emerged the top scorer of the innings, scoring 133 off 209 balls with 16 fours and a six. Abdullah played his first T20 game for Central Punjab against Southern Punjab on 30 September 2020 in the National T20 Cup competition. Batting first in the game, Southern Punjab scored 200/8 in their allotted overs. In their reply, Central Punjab chased down the target with 7 wickets and 7 balls to spare thanks to an unbeaten 102 off 58 balls by Shafique, a knock that contained 11 fours and 4 sixes. Shafique came to the crease with the scoreboard reading 2 for 1 wicket and shared a 144-run stand with Kamran Akmal. His match-winning innings won Abdullah Shafique the Man of the Match award.