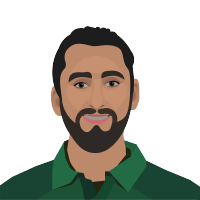 Agha Salman is a young Pakistani player who was born on 23 November 1993 in Lahore, Pakistan. Agha Salman is a right-handed batsman and a right-arm off-break bowler. His bowling and batting skills make him a worthy all-rounder. He has a good career in Pakistan’s domestic cricket circle and has also played for Lahore Qalanders in Pakistan Super League. Other major teams he has represented are Edmonton Royals, Lahore Lions, Lahore Region Blues, Lahore Shalimar. Because of his attacking batting skills, he took part in the Global T20 Canada tournament and became the leading run-scorer for his team Edmonton Royals by scoring 218 runs in just 6 matches.