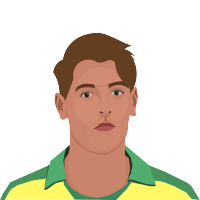 Cameron Green is a 21-year-Australian all-rounder from Subiaco, Perth, who bats right-handed and bowls right-arm fast medium. A prodigy, Green began to play at the age of 10 in the U-13 league. By the time he was 16, he was playing first grade cricket at the Western Australian Cricket Association (WACA) thanks to his accomplishments with bat and ball alike in the U-19 national league. WACA offered him a contract to play in the 2016-17 season of Sheffield Shield. He played his first List A match against the visiting Pakistan squad in January 2017.