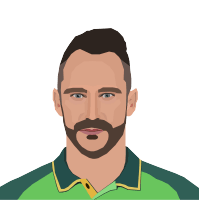 Faf du Plessis has always led from the front and there is no better person than him to lead through a lean phase in South Africa’s cricketing fortunes. For here is a man who never shies away from responsibility and faces every challenge that comes his way.

Du Plessis had a sensational start to his Test career with innings of 78 and 110 against Australia at Adelaide. Batting first, Australia piled up a score of 550. South Africa replied with 388. Australia declared their second innings at 267/8 to set a target of 430. South Africa replied with 248/8, narrowly avoiding defeat thanks largely to Du Plessis’s innings. In the next match at Perth, Du Plessis made 78 not out in the first innings to prop up South Africa’s score of 225. Australia were bowled out for 163. In their second knock, South Africa’s top order shone to set the hosts a target of 632. Australia collapsed for 322 to concede defeat by 309 runs. In January 2013, Du Plessis scored 137 against New Zealand at Port Elizabeth to help South Africa to an innings victory. He had to wait until December 2014 for his next Test ton which came in a rain-affected match at Port Elizabeth. Du Plessis’s score of 103 helped South Africa to a total of 417/8. The match had to be abandoned with the West Indian score reading 275/9. In August 2019, Du Plessis plundered 112 unbeaten runs at Centurion off the New Zealand bowlers. South Africa ended up winning the match by 204 runs. In October 2017, against Bangladesh at Bloemfontein, Du Plessis contributed 135 not out to South Africa’s total of 573/4, with four of their top five players getting to three figures. South Africa won by an innings as Bangladesh suffered batting collapses in both innings. Du Plessis’s 103 not out at Cape Town was enough to help South Africa beat Pakistan by nine wickets. In his last Test match against England held in Johannesburg in January 2020, Du Plessis could manage only 3 and 35 in his two knocks, in a match that England eventually won by 191 runs. In 65 matches, Du Plessis has scored 3901 runs at an average of 39.80 with nine centuries, including the highest score of 137. He has also taken 59 catches.

In his first ODI match against India at Cape Town in January 2011, Du Plessis scored 60. Unfortunately, it came in a losing cause as South Africa collapsed to be all out for 220 and India chased down the target with ease. He got his next half-century against Bangladesh in March 2011 during the 2011 World Cup. Du Plessis’s 52 pushed South Africa’s score up to 284/8. Bangladesh were bowled out for 78. Du Plessis had to wait until August 2014 for his first ODI hundred, which came against Australia in a triangular series with Zimbabwe being the third squad. Most importantly, Du Plessis’s 106 helped chase down a formidable target of 328. A back-to-back ton in the next match against the same rivals was in vain as Du Plessis’s 126 could not prevent Australia from winning the match. Two matches later, Zimbabwe felt the power of Du Plessis’s batsmanship when his 121 helped South Africa win by 63 runs. In the next match, this time against Australia, Du Plessis scored 96, in another successful run chase. Du Plessis had to wait until World Cup 2015 for his next hundred that he scored against Ireland at Canberra to earn his side a win in a group match. Du Plessis’s last innings was also a hundred (100) against Australia in the 2019 World Cup. The innings at Manchester helped South Africa win by 10 runs after they had scored 325/6. In 143 ODIs, Du Plessis has scored 5507 runs at an average of 47.47 with 12 centuries including the highest score of 185.

Although Du Plessis scored just 4 runs in his first T20I against England at Chester-le-Street in September 2012, South Africa won the match by 2 wickets. In October 2012, Du Plessis got his first T20I half-century against India in Colombo during the World T20. Unfortunately for him, the innings could not prevent South Africa from losing by a run. Du Plessis helped himself to a match-winning knock of 38 against New Zealand in Durban in December 2012 when New Zealand collapsed to be all out for 86. Du Plessis got to his only T20I century in January 2015, when he scored 119 to propel South Africa to a huge score of 231/7 against the West Indies. However, the West Indian batsmen came to the party and chased down the target with ease. In July 2015, Du Plessis played a match-winning knock of 79 not out against Bangladesh when his innings boosted the South African total to 148/4 before Bangladesh were bowled out for 76. In a World T20 match in March 2006, at Mumbai, Du Plessis scored 41 in a South Africa score of 209/5. Afghanistan could score only 172 in reply. Another match-winning score of 78 by Du Plessis was witnessed against Pakistan at Cape Town in February 2019. However, in his last match against Australia held at Cape Town in February 2020, Du Plessis scored just five with South Africa losing by 97 runs. In 47 T20Is, Du Plessis has scored 1407 runs at an average of 34.31 with one ton being his highest score of 119. He has also taken 24 catches.