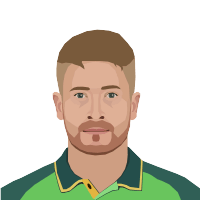 Heinrich Klaasen is a South African cricketer who has represented the team at the international level. He is predominantly a wicket-keeper-batsman who bats right-handed in the middle order. He was born on 30 July 1991 in Pretoria province of South Africa. He has represented Northern Under-19s, South Africa Emerging Players, and South Africa A team before making his debut for the national team.

Klaasen is known for his clean-hitting abilities and good glovework behind the stumps. He wanted to be an all-rounder with his wicket-keeping and batting skills. He faced stiff competition from Quinton de Kock and was often left out in the earlier periods of his career. Having been a regular in the team in the limited-overs format in the 2019-2020 season, he will definitely look to establish himself as the mainstay in the playing XI too.

Heinrich Klaasen made his ODI debut against the touring Indian team in February 2019 when Quinton de Kock was injured. He straightaway made an impact on the game with his match-winning 43 runs scored in his second match which granted him his first Man of the Match award. He was often in and out of the team in the 2018-2019 season. He made his first fifty against Zimbabwe in October 2018 in Paarl. His biggest break came against Australia in their recent series in which he scored a century and 2 half-centuries in 3 matches. He played as a batsman in the playing XI alongside De Kock, scored 242 runs and was awarded Man of the Series for his performance. In total, he has played 17 ODI matches and scored 497 runs with one century and 3 fifties to his name.

Klaasen made his T20I debut soon after his ODI debut, playing against India in February 2018. He scored his maiden fifty in the second T20I match and was awarded the Man of the Match as he helped South Africa win the game. His runs dried up in the 2018-2019 season with his highest score of just 22 in the 7 matches played in that period. He made a strong comeback in 2020 with 66 runs made against England in Centurion. He has played 11 T20I matches and scored 269 runs with 2 fifties so far.

Heinrich Klaasen was first included in the national squad in the Test format in February 2017 to play against New Zealand. However, he did not get a chance in the playing XI. He made his Test debut against India in the subcontinent. He scored just 11 runs across 2 innings in the match and is yet to feature in his second Test.

Klaasen`s impressive batting in the 2018 series against India caught the attention of the IPL selectors and he was bought by Rajasthan Royals in the auction. He later switched to Royal Challengers Bangalore in the 2019 season. He has played 7 IPL matches and scored 66 runs with the bat with the highest score of 32 runs.

Klaasen has played 73 first-class matches, 76 List A matches and 80 T20 matches in his entire career. He has scored 8092 runs with 12 centuries and 43 fifties to his name across all formats. Klaasen has picked up 8 wickets with his part-time off-spin. He is a promising player who is expected to play a big role in the South African team`s middle order in the future.