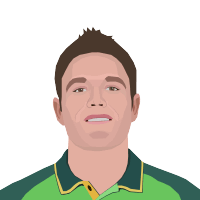 An attacking and a hard-hitting batsman, Jon-Jon Smuts first came into the limelight around 2008. It was in 2007 that Smuts made his first-class and List A debut but it wasn’t until the 2008 Under-19 World Cup that he was noticed. He may have scored only 163 runs in the tournament but his only fifty came in the all-important semifinal in which he became the top scorer (58) for South Africa Under-19. He even was a part of the South African squad that won the 2010 Emerging Players Tournament in Australia.

Since then, he has been around domestic cricket. He has played over a hundred games in each of the three formats. However, it was only in 2017 that Smuts got a taste of international cricket. Smuts made his international debut against Sri Lanka in a T20I series in early 2017. However, he failed to make any contribution of note, scoring just 36 runs in three innings. Later that year, he travelled to England and didn’t have a great series there either.

Smuts even made his ODI debut in February 2020. He played four games and has done well. He has scored 163 runs with the bat and has picked up three wickets.