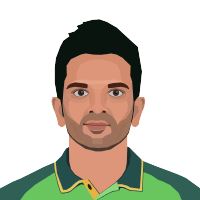 Keshav Maharaj has been around for nearly a decade and a half. It will come as a big surprise to most people to know that the left-arm spinner from South Africa made his first-class and List A debut appearances back in 2006 as a 16-year-old. He had featured for KwaZulu-Natal before he went up to the Dolphins team in the 2009 – 2010 season.

After performing consistently in domestic cricket for a few years, Maharaj got a call-up in the South African Test side travelling to Australia in late 2016. He made his debut in the first Test in Perth and hasn’t looked back since. Maharaj has gone on to become South Africa’s premier Test spinner. He has played a handful of ODIs as well but hasn’t cemented his spot yet.

Maharaj made his Test debut back in November 2016 against Australia in Perth. He made quite an impact in his very first Test match as he went on to pick up the wickets of Steve Smith, Mitchell Starc and Peter Nevill and helped South Africa turn things around and eventually win that Test match. Since then, the left-arm spinner has become an integral part of the South African Test side.

He has taken 110 wickets in 30 Test matches so far. He averages 33.19 and has picked up six five-wicket hauls, including his best bowling figures of 9/129 which he recorded in Sri Lanka in 2018.

With Imran Tahir and Tabraiz Shamsi around, Maharaj hasn’t got a lot of opportunities in ODI cricket. It was back in 2017 just before the Champions Trophy that he made his ODI debut against England. He took four wickets in two games in that series. The left-arm spinner played two games in Sri Lanka in 2018 before playing three games in early 2020 against Australia at home. All in all, he has played just seven ODI games and has picked up seven wickets.