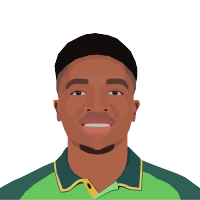 Lutho Sipamla is a 22-year-old right-arm medium-fast bowler who has represented South Africa in international cricket.

Sipamla has taken 2 wickets in 4 ODIs at 61.00 with his best bowling figures of 1/40. He played his first match against England in Cape Town on 4 February 2020. In that game, England batted first and scored 258/8. Lutho took 1/40, accounting for the dismissal of CR Woakes. South Africa chased down the target with 7 wickets and 14 balls to spare. In Johannesburg against England on 9 February 2020, Lutho took 1/42 in a losing cause as England aced a chase of 257 to win with 2 wickets and 40 balls to spare. Sipamla last appeared in an ODI against Australia in Potchefstroom in March 2020.