Matthew Gilkes is a 21-year-old left-handed Australian wicket-keeper-batsman who played for Sydney Thunder in the Big Bash League for two seasons. He played his first List A game in September 2019 when he represented New South Wales in the 2019-20 Marsh One-Day Cup. He began his first-class career with New South Wales on 1 November 2019 in the Sheffield Shield tournament.

Interestingly, Gilkes achieved his highest score in the BBL in his debut game against Perth Scorchers on 24 January 2019. Batting first in that game, Scorchers scored 181/4 in their allotted overs. When Thunder replied, they suffered an early loss of wicket when Watson got out at 18 for 1. Then followed a 120-run stand for the second wicket between Gilkes and Ferguson before Gilkes got out for 51 off 38 balls with 5 fours and 3 sixes. Ferguson went on to score an unbeaten 113 to help Thunder to victory with 6 wickets and 4 balls to spare.

Matthew scored his first half-century in first-class cricket in his fourth game against South Australia in February 2020. In that match, NSW batted first and scored 373, thanks mainly to Daniel Hughes (103) and Gilkes (83). In reply, South Australia made 207. NSW declared their second innings closed at 236/2 before bowling out SA for 269. The win took NSW to the top of the Sheffield Shield table. 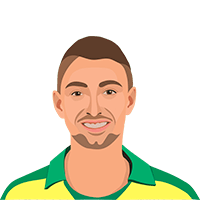