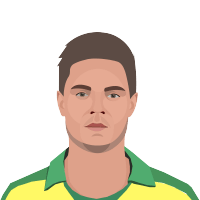 Mitchell Swepson was born on 4 October 1993 and played his maiden international match, a T20I, in June 2018 against England in Birmingham.

Swepson bowls crafty leg spin and played his first List A match in October 2015 for Cricket Australia XI in the Matador BBQ One-Day competition. He played his maiden first-class match the same month for the same team versus the touring New Zealanders. In January 2016, he played his first T20 match which was for Brisbane Heat in the BBL (Big Bash League).

A notable achievement in Swepson’s career is the hat trick he claimed in November 2019 in a game against Victoria in the Sheffield Shield.

In January 2017, Australia selected Swepson in their squad for a Test series versus India. In August 2017, he was included in the Test squad for the Bangladesh tour. In December 2019, Swepson was named in the squad for the 3rd Test versus New Zealand.

Swepson can give a healthy rip to the ball which makes him a difficult leggie to deal with. His international call-up came in early 2017 after he had starred in just 14 first-class games, but he had already impressed the selectors with his ability to take wickets.

2015-16 was Swepson’s first season playing for Queensland in the Shield and he grabbed 17 scalps in 6 matches at 37.94. He was selected for 3 first-class matches against the A teams of South Africa and India and gave a good account of himself, snaring 14 scalps at 19.35.

Shane Warne admired Swepson’s performance in the BBL for Brisbane Heat and the bowler continued to improve his skills. Though he has been selected to be a part of several Test squads, he is yet to make his debut. Swepson has continued to impress the audience in domestic cricket to justify the selectors’ decision. In the 2021 Shield summer, he bagged three successive five-fors to become a regular in the Test squad, ready to replace the established Nathan Lyon if needed.

Swepson is yet to make his Test debut

He hasn’t featured in any ODIs yet.

To date, Swepson has starred in 46 first-class games in which he has snared 140 scalps at a 33.95 average and a 57.3 strike rate with 4 five-fors and 1 10-wicket game haul. Swepson’s best figures in this format are 5/55. He has pouched 32 catches in first-class cricket.