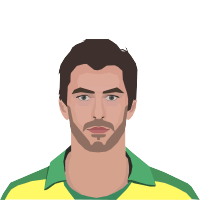 Pat Cummins was born on 8 May 1993 in Westmead, New South Wales. In 2010, Pat Cummins debuted for the Blue Mountains in the first-grade cricket. He caught selectors’ attention with his performance in the 2011 Big Bash League playing for Perth Scorchers where he ended up as the tournament`s joint-highest wicket-taker with Nathan Lyon. He was also awarded Man of the Match in the finals for his excellent bowling figures of 4/16.

Pat Cummins made his Test debut during the South Africa tour in 2011 picking up 7 wickets. Even though he was widely regarded as an exciting fast bowling prospect for Australia after his debut performance, he did not play a single Test match for the next 6 years because of injuries. He made a comeback to the Australian team in 2017 playing against India. So far he has taken 143 wickets in just 30 Test matches and has been ranked number one Test bowler in the ICC rankings for over a year. In 2020, the ICC named Cummins Test Cricketer of the Year.

Pat Cummins made his ODI debut in 2011 against South Africa.  He was sidelined in the period from 2012 to 2014 and made a comeback in 2015. Since then he has been a regular member of the Australia playing XI. In total, he has played 64 matches and has taken 105 wickets. He represented Australia in the 2015 and 2019 World Cups held in Australia and England respectively.

Throughout his career, Pat Cummins has played around 28 T20I matches taking 36 wickets. Despite making his debut in 2011, he played only a handful of matches until 2017. He has often been rested from T20I matches to manage his bowling workload in Tests and ODIs. He will be a vital member of Australia in the upcoming T20 World Cups to be held at home and in New Zealand.

Pat Cummins was first picked by Kolkata Knight Riders in the 2014 IPL. He then represented Delhi Daredevils and Mumbai Indians in the 2017 and 2018 IPL seasons. However, he missed the entire 2018 season because of an injury. In his IPL career, he has played only 16 matches and picked 17 wickets. Pat Cummins received a record bid of 15.5 Crores in the 2020 IPL auction from Kolkata Knight Riders and became the most expensive foreign player in the tournament history.

No. 1 ranked Test bowler in the ICC rankings;

Wisden Cricketer of the Year 2020;

The most expensive overseas player in the IPL – 15.5 crores by KKR.