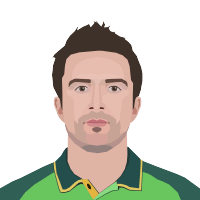 Pite van Biljon is a South African cricketer who has played in the domestic arena for nearly 14 years. He is a wicket-keeper-batsman who bats right-handed in the middle order. He was born on 15 April 1986 in Bloemfontein, South Africa. He started playing for Northerns and Free State in domestic cricket in 2006.

Van Biljon is a veteran of South African cricket, having played 103 first-class matches, 102 List A matches and 69 T20 matches. He is a prolific run-scorer with 10891 runs, including 22 centuries and 54 half-centuries made across all formats. His highest score in first-class cricket is 218 runs. He has played for Jozi Stars and Tshwane Spartans in the Mzansi Premier League.

Van Biljon made his international debut in the T20I format against Australia in February 2020 at the age of 34. He played all three matches of the series and scored just 24 runs with the bat. He will be happy to represent South Africa on the international stage and will definitely treasure this moment in his memory. However, his chances at the international level look rather bleak considering his age.