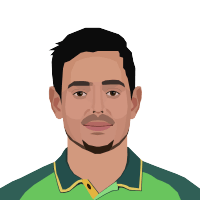 Born in Transvaal Province, South Africa, Quinton de Kock developed from a baby-faced assassin to the South African captain at the age of 27 and has been rather impressive with his performances. Quinton de Kock, an opening batsman and a wicket-keeper, caught the eye of the Highveld Lions’ selectors in the 2012-2013 season.

In his debut season with the Lions, Quinton de Kock appeared to be a prodigy. He made an instant impression both in the Champions League and domestic first-class season and was already debuting for South Africa by the end of the year.

Earlier in 2012, Quinton de Kock shone in the U19 World Cup. De Kock scored 95 in South Africa’s first match of the tournament against Bangladesh and followed it up with a 106-ball 126 against Namibia.

Quinton de Kock used to play domestic cricket for Gauteng before his franchise deals. An opener in One Day Internationals and T20Is, Quinton de Kock bats in the middle order in Test cricket. His wicket-keeping, an underrated aspect of his game, is top-notch and he is considered South Africa’s best wicket-keeper after Mark Boucher.

Quinton de Kock was also named South Africa’s Cricketer of the Year in 2017 and 2020.

In the Champions League tournament in 2012, Quinton de Kock went into a game-changing partnership with Neil McKenzie to catch the attention of South African selectors. De Kock made his T20I debut in December 2012 against New Zealand at Durban. He walked in to bat at no.4 and remained unbeaten on 28 off 23 balls to take South Africa home.

The fearless striking prowess that de Kock possessed was unmistakable. He shone with the gloves too and South Africa knew they had a mighty young talent at their disposal. Over the years, Quinton de Kock has become South Africa’s go-to batsman at the top of the batting order.

De Kock has taken 39 catches and 11 stumpings in his T20I career. In 2019, de Kock was appointed captain of the T20I side and has led them in 8 T20Is so far. Interestingly, de Kock averages 48.42 with the bat as skipper in T20Is with four of his six half-centuries coming after taking over the captaincy.

De Kock also holds the record for being the fastest South African to a half-century, coming off just 17 balls.

While it was in T20 cricket that Quinton de Kock made an impression on the audience in the domestic arena, his international career took off in the One Day International format. De Kock made his ODI debut against New Zealand at Paarl in early 2013. He batted in the middle-order and did show any extraordinary performance. By the second game, he was opening the batting for South Africa, a position he has owned ever since.

Quinton de Kock made a maiden ODI hundred against Pakistan at Abu Dhabi later the same year but his big breakthrough came in the home series played against India in December 2013. Quinton de Kock, aged 21, made a hat trick of centuries, then the most achieved by anyone in ODIs, in the series against India, making 135, 106 and 101. Two ODIs later, he made 128 against Sri Lanka in the Island Nation.

In short, de Kock’s career took off and he made a very successful partnership with Hashim Amla at the top. De Kock and Amla have scored 4300 runs in ODIs, averaging 46.73 with 11 century stands. Their contrasting playing styles made the two a big hit in One Day Internationals for South Africa.

De Kock’s tally of 15 ODI tons is the fifth-best for a South African in the format. At his 27, Quinton de Kock has more than enough time to go past the country’s record of 27 centuries held by Hashim Amla. As captain, de Kock has played 8 ODIs, averaging 38-odd with a century and two fifties.

Quinton de Kock’s rash batting wasn’t expected to be a huge hit in Test cricket but he has surprised one and all in his so far short Test career. Making his debut in 2014 in Tests, Quinton de Kock has featured in 47 matches, scoring 2934 runs with five centuries. A middle-order batsman in this format, Quinton de Kock has been the mainstay in South Africa’s batting lineup.

De Kock has 191 catches and 11 stumpings in Test cricket and has been one of the most influential number 7 batsmen in the format since his debut. De Kock is the fastest wicket-keeper to get 200 dismissals in Tests, coming off just 47 Tests.

Quinton de Kock in the IPL