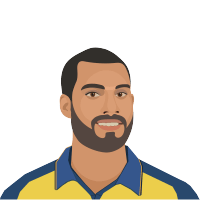 Roshen Silva is a 32-year-old batsman from Colombo, Sri Lanka, who has represented his country internationally. He bats right-handed and bowls occasional right-arm off breaks. Roshan first caught everyone’s attention when he was selected to represent Sri Lanka in the 2008 U-19 World Cup where he scored runs and took wickets. Earlier, in 2006, Silva began his first-class career and went on to score prolifically, year after year. In July 2016, the Sri Lankan selectors included him in the Test team for the then upcoming series versus Australia. A year later, Silva found himself in the Test squad for the series against Pakistan in the UAE.