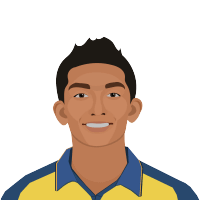 Santhush Gunathilake is a 21-year-old Sri Lankan batsman from Colombo. He also bowls occasional right-arm medium pace. He began his first-class career with Ragama Cricket Club in January 2019 in the 2018–19 Premier League Tournament. Earlier, he gained national attention when he was named to represent Sri Lanka at the 2018 U-19 World Cup. He played his first List A game for Colts Cricket Club in December 2019 in the 2019–20 Invitation Limited Over competition. The Sri Lankan selectors named Santhush in the Sri Lanka Test team to play in the upcoming series versus South Africa.