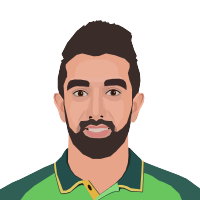 Tabraiz Shamsi is a South African left-arm chinaman bowler. He was born on 18 February 1990. Shamsi has appeared in first-class games for various teams such as Titans, Lions, KwaZulu-Natal Inland, KwaZulu Natal, Gauteng U19s, Gauteng and Dolphins. He was a student at Parktown Boys High School in Johannesburg.

In 2015, Shamsi got on top of the wickets tally for St Kitts and Nevis Patriots in the CPL (Caribbean Premier League). He was a member of the Easterns team in the Africa T20 Cup that year. In April 2016, he was picked by Royal Challengers Bangalore for the 2016 IPL (Indian Premier League). In his first match versus Rising Pune Supergiants in Pune, he grabbed 1/36 in four overs to help his team notch a 14-run victory.

In August 2017, Shamsi was selected to Stellenbosch Monarchs’ team for the maiden edition of the T20 Global League. However, this tournament was later canceled. Shamsi was on top of the wickets tally in the Ram Slam T20 Challenge in the 2017 – 2018 season with 16 scalps taken in 11 games. He also had the highest wicket numbers in the Momentum One Day Cup in 2017 – 2018, with 26 dismissals in nine games.

Shamsi was selected in the Titans squad for the 2018 – 2019 season. Later in October 2018, he was picked by the Paarl Rocks for the maiden Mzansi Super League T20 competition. He had the joint highest wicket tally in this tournament with 10 scalps in 9 games.

In July 2019, the Edinburgh Rocks picked Shamsi in their squad for the first season of the Euro T20 Slam competition. However, this tournament was canceled the next month. In September 2019, the Paarl Rocks selected Shamsi for the Mzansi Super League tournament held that year. After that, in July 2020, the Jamaica Tallawahs included him in their team for the CPL 2020.

Shamsi made his ODI debut against Australia in June 2016. His first Test was played against the same side several months later, in November 2016. Shamsi’s first Test victim was Nathan Lyon. He debuted in T20Is playing against England in June 2017. Shamsi’s first T20I scalp was Virat Kohli of India in his third game. Moreover, he was part of the South African squad that participated in the 2019 ODI World Cup.

Shamsi boasts a deceptive googly and numerous variations which are the reasons for his success in first-class and international cricket. He was developing steadily and was a leading player in the promising crop of spinners produced by South Africa in domestic cricket. Shamsi shone for Easterns in the 2013 – 2014 domestic season, gaining 47 scalps at 20.02 to have the third-highest wicket tally in the 3-day cup.

After Shamsi made his international debuts in all 3 formats, he could not get a regular spot in the national team as Imran Tahir was preferred for limited-overs games and Keshav Maharaj for Tests. Shamsi played 2 matches of the 2019 ODI World Cup. He grabbed his chance after Tahir had retired from ODIs at the end of the tournament.

In 2019 – 2020, Shamsi was the second-highest wicket-taker in the Mzansi Super League, helping the Paarl Rocks win the tournament. His excellent performances earned him a regular place in the South African team for limited-overs series versus Australia and England. Apart from being a capable spin bowler, Shamsi can solidly stonewall as a lower-order batsman to help his teams gather useful runs at the end of an innings.