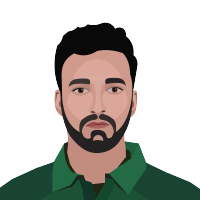 Zafar Gohar is a 25-year-old slow left-arm orthodox spin bowler from Lahore, Pakistan. Gohar gained national recognition when PCB picked the young bowler to represent Pakistan in the U-15 World Championship hosted by the West Indies in 2008. He was named in the Pakistan U-19 squad four years later. Following Zafar’s performance in the U-19 World Cup, Zarat Taraqiati Bank Limited, one of Pakistan’s largest departmental squads, signed him up to skipper their U-19 team. From there to the senior team was a short step up that allowed him to play alongside such players as Yasir Hameed, Abdul Razaq and Saeed Ajmal. He made his first-class debut in 2013 for Zarat Taraqiati Bank Limited versus Water and Power Development Authority. After that, teams such as the State Bank of Pakistan and Sui Southern Gas Corporation sought Zafar’s services.