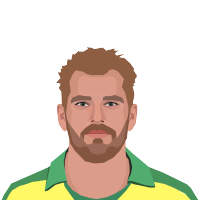 Born in Colac, Victoria, Aaron Finch, unlike the more prodigious David Warner, had to work his way up the ladder to become the mainstay in Australia’s batting lineup. He became a regular in the Victoria team in 2009 – 2010 and was an instant hit, making his national debut two years later, in 2011. After nearly a decade of international cricket, Aaron Finch has become an established star, even being appointed skipper in the shorter formats of the game.