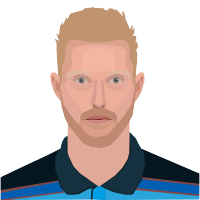 A prodigy set to accomplish great things, Ben Stokes is considered England’s greatest asset in the 21st century. A hard-hitting batsman, a brilliant bowler and a terrific fielder, Ben Stokes is a perfect example of a modern-day cricketer who juggles three formats. A fantastic Test player, a World Cup winner in ODIs and a stereotypical T20 player, Stokes has established himself as a superstar in World cricket and with every match played, he is only enhancing his reputation as one of the world’s best.