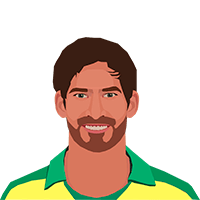 Joe Burns is a 31-year-old top-order batsman who bats right-handed and is an occasional right-arm medium pace bowler who has represented Australia in Tests and ODIs. Burns became a professional cricketer by accident. By his own admission, the young man went to university, aiming to “get a job in business.” As things transpired though, after he had made his Sheffield Shield debut for Queensland in February 2011, Burns never looked back. He scored 140 in his first match against South Australia and a year later became one of the most prolific batsmen in Australian domestic cricket. The next step was his selection to the Australia A squad and a county contract with Leicestershire as a replacement for West Indian Ramnaresh Sarwan. He also scored a lot of runs for Brisbane Heat in the Big Bash League and it soon became a foregone conclusion that Burns would play for Australia in international cricket.