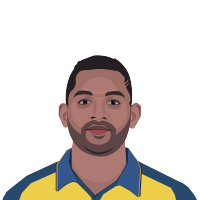 Shehan has played 12 ODIs and scored 195 runs at 21.66. He has also taken 3 wickets at 92.33. Although he did not make any runs in his first ODI against the West Indies in Colombo on 1 November 2015, he took one wicket for 15 runs, responsible for the dismissal of JL Carter. Chasing a target of 160 in a rain-curtailed game, Sri Lanka registered a one-wicket victory by the D/L method. Shehan’s highest ODI score went in vain as Sri Lanka, chasing 306 to win in Karachi on 30 September 2019, were bowled out for 238. Batting at number six, Shehan made 96 off 109 balls with 7 fours and a six and shared a 177-run partnership for the 6th wicket with Dasun Shanaka. He last appeared in a game against Pakistan that took place in Karachi on 2 October 2019.

Shehan has scored 241 runs in 18 T20Is at 15.06 and taken 3 wickets at 71.00. He demonstrated his all-round skills in his first ODI against Pakistan in Colombo on 1 August 2015, scoring 40 in Sri Lanka’s first-innings score of 172/7 and taking 1/37 in Pakistan’s successful run chase. On 9 November 2015, Sri Lanka batted first against the West Indies in a game held in Pallekele. Batting at number 3, Shehan made 36 off 22 balls with 2 fours and 2 sixes to help his side to a score of 215/3; he shared a 54-run partnership for the 3rd wicket with Dinesh Chandimal. When the West Indies batted, they were bowled out for 185. Shehan Jayasuriya took 1/11, accounting for the wicket of Narine. He last played against the West Indies in Pallekele in March 2020.