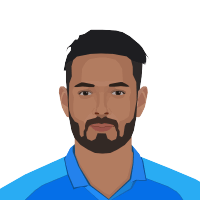 Born in Mumbai on 26 June 1993, Shivam Dube has become India’s latest T20 superstar, having burst onto the international scene in November 2019.

Living in the inner-city slums of Mumbai, Dube and his family fell on hard times and due to financial constraints, he was forced to temporarily leave cricket when he was just 14 years old.

This led to Dube gaining a significant amount of weight and losing his interest in the game before his cousin and uncle convinced him to return to cricket five years later and, as a result, he caught the attention of the Mumbai team selectors.

Known for his power hitting, Dube was seen as an ideal fit for T20 cricket and he made his debut for Mumbai in the Syed Mushtaq Ali Trophy against Baroda in 2016.

Mumbai has had continued success across all three formats of the game with the all-rounder averaging over 40 in both first-class and List A cricket for his home side.

With the ball in his hand, Dube has managed to snare over 100 first-class wickets with his medium pace and he is considered one of the most skilful bowlers in world cricket.

Despite his relatively slow transition into the professional game, Shivam Dube did not get discouraged and pursued his goals to play in the IPL.

Seen as a potential match-winner with both bat and ball, Dube was one of the most talked-about players ahead of the 2019 IPL Player Auction.

To add further intrigue and drama to his selection, on the eve of the IPL player auction, Dube hammered 5 sixes in an over in a Ranji Trophy game against Baroda which made him one of the most sought after picks ahead of the draft.

In a fierce battle, it was Royal Challengers Bangalore that got Shivam Dube for the 2019 IPL season, paying 5 million Indian CR ($650,000).

Royal Challengers Bangalore are a side packed with talent and Dube had to be patient for his opportunity.

Dube has had even fewer chances to demonstrate his skills with the ball in IPL cricket, bowling just 1.4 overs in the 2019 IPL season for Royal Challengers Bangalore.

Representing India in any form of cricket is a dream of millions of young cricketers and Shivam Dube achieved his lifelong goal on 15 December 2019.

Given ODI cap number 228, Dube demonstrated his impressive form in all formats of the game for Mumbai which earned him an Indian call-up.

India took on the West Indies in the first game of a three-match series in Chennai and Dube was selected alongside Indian greats Virat Kohli and Rohit Sharma.

The West Indies won the toss and elected to field, restricting India to 287/8 from their 50 overs.

Shivam Dube batted at 8 but only managed 9 runs off 6 balls before being caught off the bowling of Keemo Paul as he looked to up the run rate.

In terms of result, it was a game for Dube and India to forget as the West Indies chased down the modest total comfortably, with Shai Hope and Shimron Hetmyer registering centuries.

Dube was entrusted with the ball, bowling 7.5 overs for 68 runs in a relatively forgettable debut match for the Indian ODI side.

With a history of strong performance in the shortest format of the game, it was perhaps no surprise to see Dube selected for the Indian T20 side in November 2019.

T20 cap number 82, Shivam Dube was handed his debut against Bangladesh in front of a packed house in Delhi.

The game was largely forgettable for Dube and India as they were well beaten but the left-hander established himself within the Indian T20 setup.

He has gone on to represent India 13 times in T20 cricket, with his most notable performance coming against the West Indies in December 2019 when he scored 54, batting at 3.

Dube has struggled to hold down a position in the batting order in the T20 side, having batted as high as 3 but also as low as 8 in Virat Kohli’s attempts to find the best place for Dube in the Indian side.

With the ball, Dube has shown some impressive results too, taking 3/30 against Bangladesh in just his second game for the T20 side and proving his worth with both bat and ball for the T20 team.

At the age of 27, the future looks bright for Shivam Dube who would have surely represented India more in recent times, if it weren’t for the COVID-19 pandemic restricting travel and international cricket fixtures.

Growing up in Mumbai in a family particularly fond of cricket, Shivam Dube was always regarded as a prodigious cricketing talent.

He began playing cricket at the tender age of six and enrolled at the Chandrakant Pandit Cricket Academy, Andheri West, Mumbai to hone his skills.

Famed coach Satish Samant took Dube under his wing at the Chandrakant Pandit Cricket Academy and under his stewardship, Dube developed a strong hitting game and enhanced his bowling skills.

Dube’s father once ran a dairy farm business as he looked to provide for his family but he faced financial difficulties, forcing fourteen-year-old Dube to take a break from the game.

Things got better for the Dube family and them moving to Bhiwandi, Maharashtra brought some change in the family’s fortunes.

Shivam Dube’s father now runs a successful jeans washing business and owns his own factory in the city of Bhiwandi.

Shivam Dube is a college graduate, he follows Hinduism and has a sister, Pooja Dube.