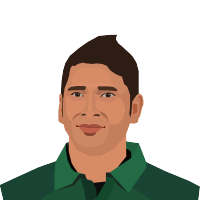 Born to a farmer in Swabi, located near Tarbela Dam in Pakistan, Yasir Shah made his first-class debut when he was only 15 years old. He has played all age-level cricket for Pakistan. He is a cousin of Pakistani fast bowler Junaid Khan and Australian cricketer Fawad Ahmed.

Yasir Shah is one of the most prolific bowlers in Pakistan. He is a regular member of the Test team and ever since his debut in Test cricket, he has not looked back. He holds a joint record of fastest to 100 wickets and the record of fastest to 200 wickets. He is 34 years old, athletic and cheerful, always sharing his optimism with the team. Shane Warne regarded him as the best modern-era leg spinner. His recent performance has been below par but the team management believes in him and his abilities.

Shah was first seen wearing national colours in an ODI match against Zimbabwe in Harare. He took 2 wickets in that match. In the same series, Yasir Shah made his T20 debut. He has played two T20 matches and has remained wicketless. Yasir Shah has also featured in the 2015 World Cup in Australia and played his debut World Cup game against India. He has played 25 ODIs and taken 24 wickets with his best figures of 6/26. His campaign in limited-overs cricket has not been impressive but he has shown his talent in the longer format of the game.

Saeed Ajmal, the most feared off-spinner lately, was banned over his illegal action in 2014. Yasir Shah came into the team as a replacement of Saeed Ajmal in a Test series against Australia in the UAE. Shah bamboozled the Australian batting lineup and Pakistan won the series convincingly. This was the series in which Misbah-ul-Haq slammed the fastest hundred in Test cricket off just 56 balls. Shah took 7 wickets in his debut match and took 5 wickets in the second match.

2015 was Yasir Shah’s year. He made his mark in international cricket when in a series against Sri Lanka he became the fastest Pakistani to reach the milestone of 50 Test wickets in 9 matches. Before him, the joint-fastest record was held by Waqar Younis, Shabbir Ahmed and Mohammad Asif in 10 matches. He was in the World Test XI of 2015.

Yasir Shah in 2016 was briefly ranked the number one Test bowler, dismantling Jimmy Anderson off the throne. It was during England tour that he was ranked number one but after the second Test match, he went 4 places down. He was the only leg-spinner after Shane Warne to be ranked the number one Test bowler. He was also the first leg-spinner after Mushtaq Ahmed to take a five-wicket haul at Lord’s.

In Yasir Shah’s 17th Test Match, he reached the landmark of 100 Test wickets, the second-fastest by any bowler. Yasir Shah has played 42 Test matches in total and has taken 224 wickets. His best figures of 8/41 in Test cricket have been achieved against New Zealand. In that match, Yasir Shah took 14 wickets and during the same series, he became the quickest bowler to reach a milestone of 200 Test wickets.

Besides the record for wickets, he also holds the record of conceding 200 plus runs thrice in an innings. He also has a century to his name scored against Australia last year. He is a force to be reckoned by the opposition and is an asset for the Pakistani team.