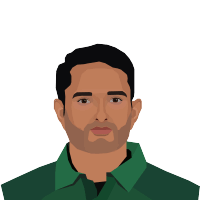 Mohammad Abbas is a 30-year-old right-arm fast-medium bowler who has represented Pakistan in Tests and ODIs. His ability to swing the ball has made him a continuing asset in Test cricket.

Abbas has played 21 Tests and taken 80 wickets at 21.70 with his best bowling figures of 5/33. He played his first Test against the West Indies in Kingston in April 2017. Though he took only one wicket in that game while conceding 63 runs, Abbas found his bearings in Bridgetown where he took 4/56 and 2/57 in the two West Indian innings. Abbas got his first haul of five wickets in an innings in Roseau where his figures of 5/46 helped bowl the West Indies out for 246 in reply to Pakistan’s score of 376, in a match Pakistan won by 101 runs. He soon proved valuable for the team by providing timely breakthroughs and enjoyed a great match performance against Ireland in Dublin, taking 4/44 and 5/66 in a match that Pakistan won by 5 wickets. At Lord’s in May 2018, Abbas helped bowl out England in their first innings for 184, taking the wickets of Stoneman, Stokes, Bess and Broad. Pakistan replied with 363, taking a first-innings lead of 179. Abbas was again England’s tormentor in their second innings when he took 4/23 to bowl them out for 242, leaving Pakistan 64 to get to win the game. This time around, Abbas got rid of opener Alastair Cook and went on to take the wickets of skipper Joe Root, Buttler and Broad. His match-winning performance had Abbas named Man of the Match. His best bowling in an innings came against Australia in Abu Dhabi in October 2018 when his 5/33 helped decimate the Aussie innings for 145 after Pakistan had posted 282. Pakistan went on to win the game by 373 runs. He last appeared in a Test match against England in Southampton in August 2020.

Abbas has played three ODIs and taken one wicket at 153.00. He played his first match against Australia in Sharjah in March 2019. He took his only wicket in that game while conceding 44 runs. Pakistan had batted first to post a score of 280/5 before Australia chased it down with 8 wickets and an over to spare. Abbas played two more matches in that series without much success and has not been considered for selection to the Pakistan ODI squad since then.