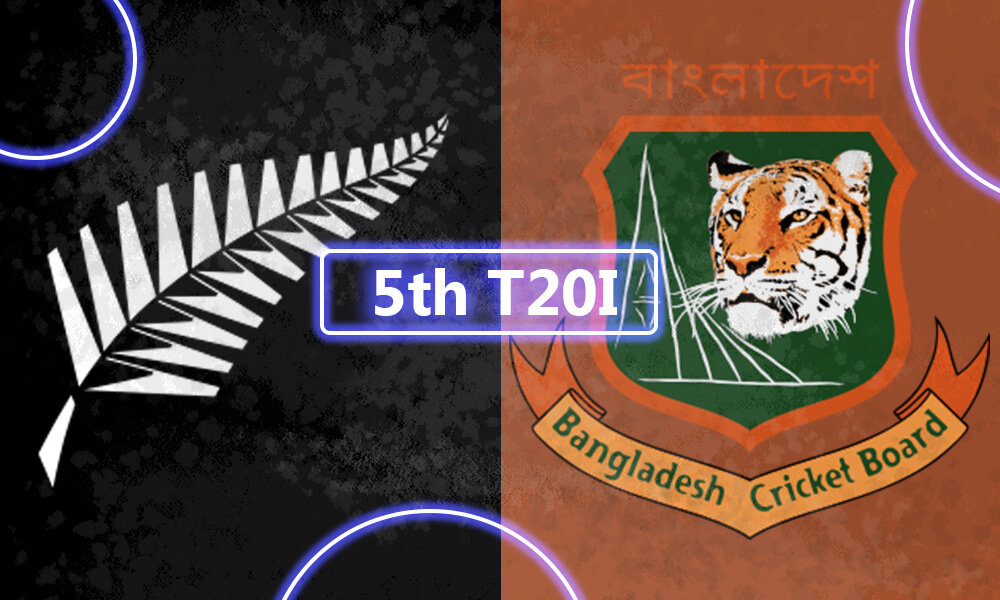 An exciting series is heading for a finish with New Zealand vs Bangladesh, the 5th T20I on the New Zealand tour of Bangladesh, to be played on September 10, 2021, at Dhaka. Bangladesh who beat Australia 4-1 before this series took a 2-0 lead in the ongoing on. But NZ bounced back by winning the third game to set up an intriguing contest.

Bangladesh created history by winning the first match of the series. It was their first-ever victory over New Zealand in the shortest format. In that match, New Zealand batted first and, on a spin-friendly wicket they were soon in trouble, losing four wickets with only nine runs on the board. After that, they never recovered and went on to be bowled out for 60 in the 17th over. For Bangladesh, Mustafizur Rahman was the most impressive bowler taking 3/13. The spinners, Mahedi Hasan, Naseem Ahmed, and Shakib accounted for five of the wickets that fell, with the remaining two going to Mohammad Saifuddin.

Though Bangladesh lost two quick wickets when they replied, the modest target was never going to challenge them. In the process, they got past the line with seven wickets and five overs to spare. For Bangladesh, Shakib top-scored with 25. For New Zealand, Patel, McConchie, and Ravindra took one wicket each.

By winning the second match as well, the hosts proved that the first win was no fluke.

But NZ fought back in the third game on 5 September. Batting first, they scored 128/5 on the back of cameos by Ravindra, Nicholls, Young, and Blundell Before bowling out the hosts for 76. Patel took four wickets while McConchie grabbed three.

In our Bangladesh vs New Zealand Prediction, we forecast a win for the resurgent New Zealanders on 10 September.

Betting odds have swung in favour of NZ after their fightback in the third game.

NZ have begun to assert their superiority after getting used to the local conditions.