Caribbean Premier League 2021 will be set alight by Jamaica Tallawahs vs St Kitts & Nevis Patriots at Basseterre on September 8. After 7 games played, STKNP are atop the points table, while JT are second last, having played 5 games. We preview the JT vs STKNP match and male our match 21 prediction. 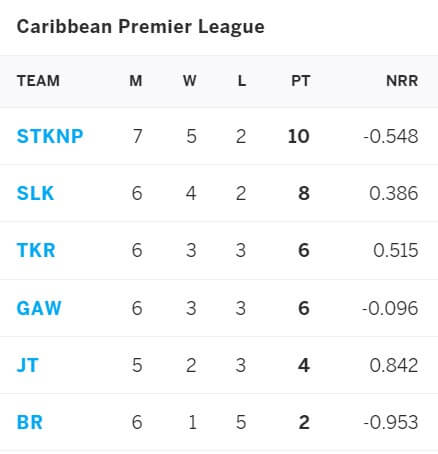 The two sides last met on first September at the same venue.   Tallawahs batted first and began with an opening stand 41 runs in just 3.4 overs. Thereafter despite a regular fall of wickets they managed to reach a final score of 166/8. Carlos Brathwaite was the top scorer with 27, in an innings in which many batsmen got starts that they failed to convert. Dwayne Bravo took three for 25 to emerge Patriots’ best bowler.

When Patriots batted. Tallawahs managed to two wickets for 47 within the powerplay. But some sensible batting saw Patriots past the target with six wickets and more than two overs to spare. Sherfane Rutherford was the top scorer with 50 not out. For Tallawahs, Edwards, Pretorius, Russell, and Paul took one wicket each.

We predict that Patriots will beat Tallawahs on 8 September.

Betting odds favour Patriots to prevail over Tallawahs in match 21 of CPL 2021.

Patriots are overwhelmingly strong and the result of the match is not in doubt.