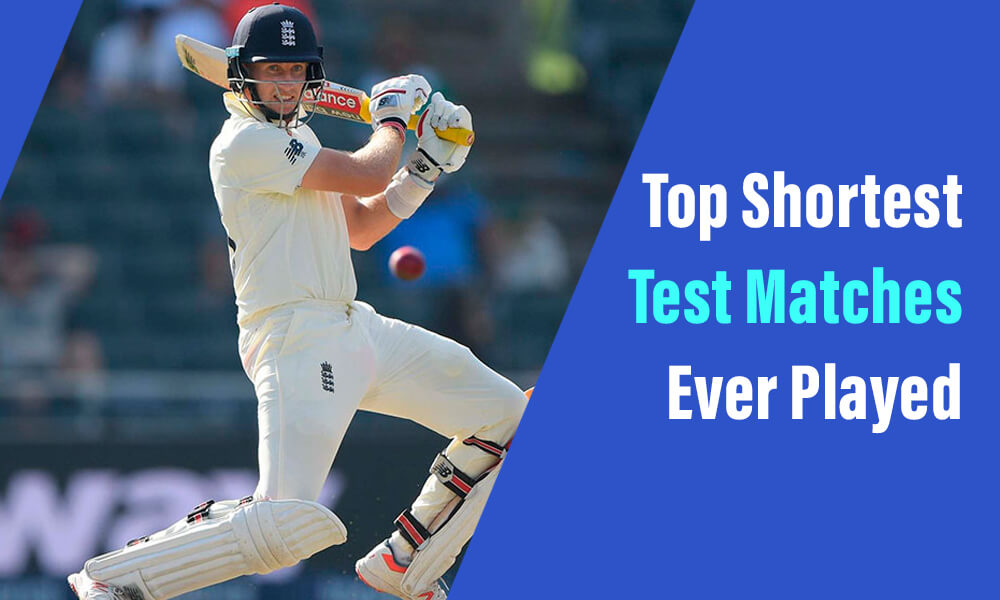 In this article, we look at the shortest Test match ever played. For our purpose, we have used the number of balls bowled as a measure. We have also ensured that the matches we considered were completed in all respects, whether or not interrupted by inclement weather.

The shortest Test match by overs with result was the 5th match of a series in Melbourne on the South Africa tour of Australia in February 1932, South Africa batted first and were bowled out for 32. The innings lasted just 23.2 overs. Skipper Jock Cameron who top-scored with 11 runs was the only batter to get into double figures. For Australia, Bert Ironmonger took 5 wickets for 6 runs, while Laurie Nash returned figures of 4 for 18. Thanks to innings of 40 by Kippax and 42 by Fingleton, Australia replied with 153 in 54.3 overs. For South Africa, Bell, Quinn, and McMillan took three wickets each. In their second knock, the tourists were bowled out for 45, rendering Australia the winners by an innings and 72 runs. This time around opener Sid Curnow (16) was the only player to get into double figures. The innings lasted only 31.3 overs, with Ironmonger once returning figures of 6/18.

Bridgetown, Barbados, was the host venue of the first Test of a 4-match series on England’s tour of West Indies in January 1935.

The game gave tough competition to the shortest Test match ever played and came within 17 balls of setting a new record.

West Indies batted first and made just 102 runs from 47 overs. George Headley who made 44 before being run out was the top scorer, with Leslie Hylton (16) the only other batter to reach double figures. For England, Ken Farnes (4), George Paine (3), and Eric Hollies (2) shared the wickets between them. In reply, England made 81/7 in 29.3 overs before declaring the innings. Wally Hammonds (43) had the only innings of note. For the hosts, Martindale and Hylton took three wickets each. In their second knock, the home side declared their innings closed at 51/6 made from 19 overs, with three players getting to double figures. Set 73 to win, the tourists knocked off the runs in 16.3 overs, with 4 wickets to spare. Hammond remained not out on 29 to help his side across the line. For the hosts, Martindale took five wickets.

In the 3rd match of a series in Manchester on the Australia tour of England in August 1888, the hosts batted first and were bowled out for 172 in 113.1 overs. Skipper WG Grace top scored with 38. While several batters got off to starts, an absence of partnerships hurt England’s cause. For Australia, Charlie Turner took five wickets while JJ Ferris and Sammy Woods grabbed two each. When Australia batted, they collapsed to be bowled out for 81 in only 52.2 overs. While John Lyons top scored with 22, few other batters got into double figures. Among the England bowlers, Bobby Peel was the wrecker-in-chief, taking 7 for 31. England imposed the follow-on. In their second knock, the visitors collapsed yet again to be all out for 70 in 31.1 overs, allowing the home side to win by an innings and 21 runs. While the top four batsmen failed to score a run, John Lyons was once again the highest scorer with 32. For England, Bobby Peel took 4 wickets while George Lohmann and Johnny Briggs chipped in with 3 and 2 scalps, respectively.

Lord’s was the venue of the first Test of a series when Australia toured England in July 1888. Batting first, the visitors were bowled out for 116 in 71.2 overs. Captain Percy McDonnell and wicketkeeper Jack Blackham were joint top-scorers with 22 runs each. For England, Bobby Peel took 4/36 to emerge as the most successful bowler. When England replied, they collapsed to be bowled out for 53 in 50 overs. While Johnny Briggs (17) top-scored for the hosts, skipper WG Grace (10) was the only other batter to reach double figures. Charlie Turner took five wickets to emerge Australia’s best bowler. In their second knock, Australia made just 60 in 29.2 overs. JJ Ferris (20) and Charlie Turner (12) were the only batters to achieve double figures. For England, Lohmann and Peel took four wickets each. Chasing 124 to win in the fourth innings, England were bowled out for 62 in just 47 overs. While Grace (24) was the only English batter to make a substantial score, Charlie Turner and JJ Ferris took five wickets each for Australia.

In the 2nd Test of a series in Cape Town on the England tour of South Africa in March 1889, the visitors batted first and made 292 in 123.1 overs. While opener Bobby Abel made a ton (120), England keeper Henry Wood contributed a fifty (59). South Africa’s Gobo Ashley (7/95) was the most successful bowler. When South Africa batted, they were bowled out for 47 in 47.1 overs. While opener Bernard Tancred carried his bat through for an unbeaten 26, no other batter got to double figures. For England, Johnny Briggs was the most impressive bowler, taking seven wickets. Following on, the hosts did even worse in their second knock and were bowled out for 43, with wicketkeeper Fred Smith (110) the only batter to register a double-figure score. English bowler Johnny Briggs was once again the best bowler on display, taking 8/11.