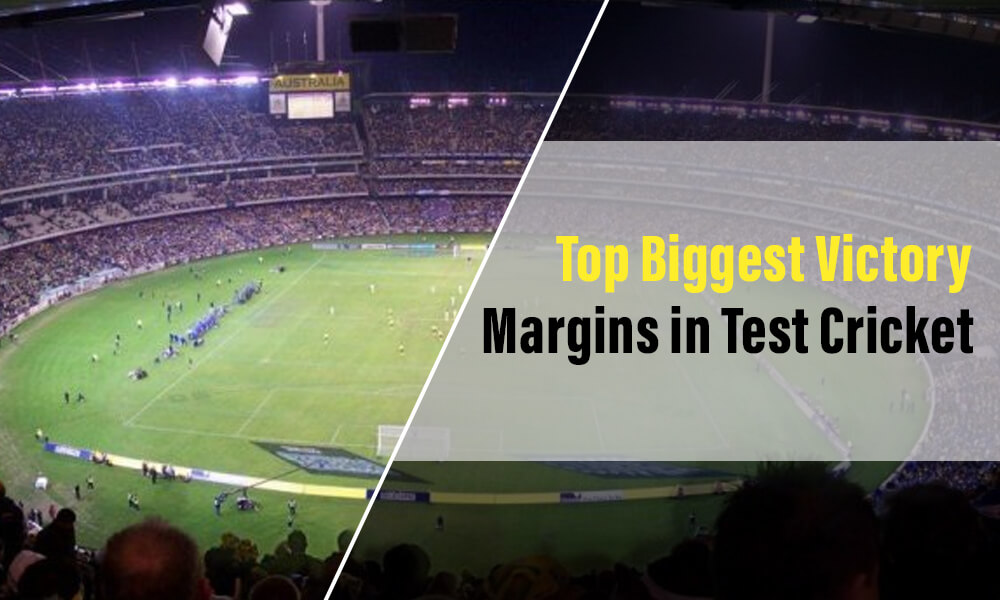 In this article, we look at the biggest Test win registered by England versus Australia in August 1938. We also look at other biggest wins in Test cricket registered since. Interestingly, all of these wins were innings victories with the most registered after imposing a follow-on against the losing side.

The Oval was the host venue of the 5th Test of a series in August 1938 on Australia’s tour of England.  Batting first, England piled up 903/7 on the back of opener Len Hutton’s mammoth knock of 364 supported by centuries from Maurice Leyland and Joe Hardstaff. In reply, Australia scored 201, with English bowler Bill Barnes returning figures of 5/49. Following on the visitors collapsed to be all out for 123 in the second innings. This time around, Ken Farnes was England’s most impressive bowler with figures of 4/63.

In February 2002, South Africa hosted Australia in Johannesburg in the first match of a series. The tourists batted first and declared their innings at 652/7, thanks to an unbeaten career-best knock of 204 by Adam Gilchrist. Matthew Hayden and Damien Martyn contributed hundreds to add to South Africa’s agony. Glenn McGrath and Brett Lee took 3/28 and 3/40 respectively to help dismiss the hosts for 159 runs in the first innings. Following on, the home side did not do much better in the second innings. They were bowled out for 133, with Shane Warne returning figures of 4/44.

The touring West Indians took on hosts India at Kolkata in the third Test of a series in December 1958. Batting first, the visitors notched up 614/5 before declaring, thanks to a double hundred by Rohan Kanhai and tons by Basil Butcher and Gary Sobers. India made 124 in reply, with Hall and Gilchrist grabbing three wickets each. Following on, the home side were bowled out for 154 in the second innings. This time around, Gilchrist returned figures of 6/55.

Brisbane hosted the first Test of an Ashes series in November 1946. The hosts batted first and made 645 runs, thanks to centuries by Don Bradman and Lindsay Hassett. In reply, England could muster only 141. Keith Miller did the most damage with the ball, taking 7/60. Following on, the visitors were bowled out for 172. This time around, Ernie Toshack, with returns of 6/82, was Australia’s most impressive bowler.

In the first Test of a series in Lahore on the New Zealand tour of Pakistan in May 2002, the home side batted first and scored 643 thanks to a career-best score of 329 by Inzamam-ul-Haq, assisted by a century by opener Imran Nazir. New Zealand replied with 73 — their batters were completely at sea against Pakistan paceman Shoaib Akhtar who took 6 wickets for 11 runs. Following on, the Kiwis made only 246. This time around, Danish Kaneria (5/110) did the most damage with the ball.

In a Test match in Wellington during the West Indies tour of New Zealand in March 2002, the visitors declared their innings at 660/5, thanks to tons by Brian Lara, Jimmy Adams, and Junior Murray. In reply, the hosts scored 216. Courtney Walsh was the wrecker-in-chief with figures of 7/37. In the 2nd innings, New Zealand could manage only 122, with Walsh grabbing 6/18 to add to his first-innings tally.

Dhaka hosted a Test match during the West Indies tour of Bangladesh in December 2002. Batting first, Bangladesh were bowled out for 139 runs. Among the West Indian bowlers, Pedro Collins (5/26) and Vasbert Drakes (4/61) were outstanding. In reply, the visitors piled up 536 on the back of Ramnaresh Sarwan’s first Test ton, aided by fifties from Jacobs, Samuels, Hinds, and Gayle. In their second knock, the hosts could manage only 87 runs, with Jermaine Lawson returning figures of 6 for 3.

On the Zimbabwe tour of New Zealand in January 2012, the sides met in a Test match in Napier. Batting first, the hosts made 495/7 declared, thanks to tons by Ross Taylor and BJ Watling. Zimbabwe replied with a paltry 51 all out. New Zealand bowlers Boult, Martin, Bracewell, and Southee took two wickets each. Following on, the visitors were bowled out for 143 on the back of bowling figures of 6/26 and 3/26 returned by Chris Martin and Doug Bracewell respectively.

In a Test match in Harare on the New Zealand tour of Zimbabwe in August 2005, the visitors piled up 452 runs thanks to tons by Daniel Vettori and Bredon McCullum. In the first innings, the hosts scored only 59 runs, with James Franklin and Chris Martin taking 3/11 and 3/21 respectively. In their second knock, Zimbabwe could manage only 99 runs. Vettori followed up on his batting performance with bowling returns of 2/1 and 4/28 in the two innings.

In a Lord’s Test match during India’s tour of England in June 1974, the hosts batted first and notched up a score of 629 thanks to tons by Dennis Amiss and two others. India replied with 302. Chris Old was England’s best bowler, taking 4/67, while Mike Hendricks had returns of 3/46. Following on, India were bowled out for 42, their lowest Test innings at the time. This time around, Old returned figures of 5/21, while Geoff Arnold took 4/19.