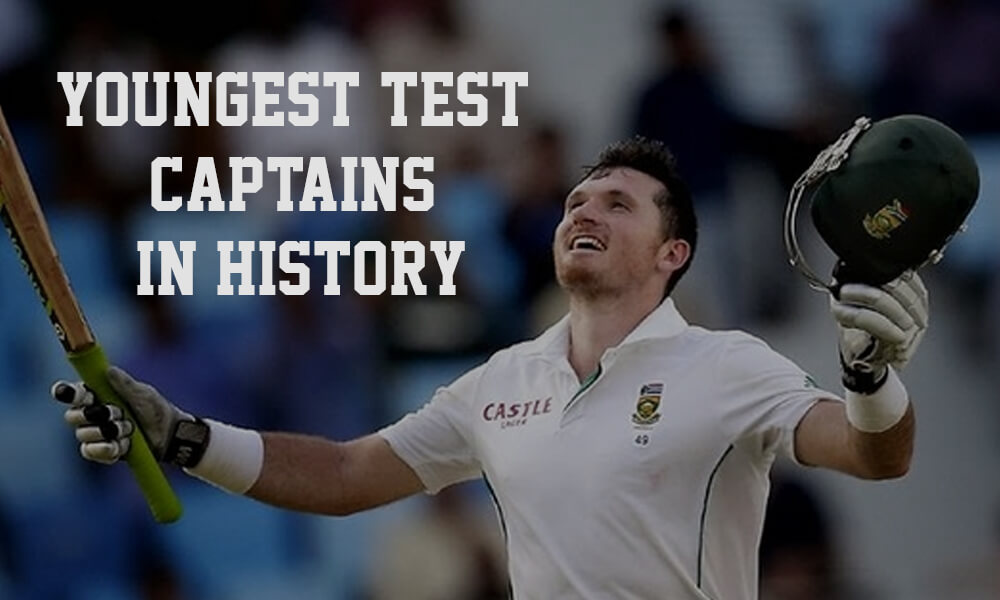 In cricket, it can be really difficult to lead a team in Test format. The captain needs top-notch qualities, including patience and a high concentration level for the next five days. Despite the challenges, Test stars proved themselves as the best youngest Test captain in history.

Below is a table and a list of the top ten youngest captains in Test cricket ever.

On 25 June 2007, Mohammad Ashraful made his Test cricket debut as a captain against Sri Lanka at the ground of Colombo. He holds the captaincy record of 1 draw, 12 losses, and 0 wins in 13 matches.

After making a century on his Test debut, Ashraful announced his arrival to Test cricket in a mesmerizing way. He was handed over the national side captaincy after Habibul Bashar stepped down. Although he wasn’t a successful Test captain for Bangladesh’s side, he lost all matches except for one draw, and he was a good batsman.

On 14 February 1899, Murray Bisset made his Test captaincy debut against England on the grounds of Johannesburg. He played only two matches as a captain and his short span of captaincy was not successful.

Murray was a wicket-keeper batsman of the South Africa cricket team. He was appointed as captain on his test debut against England. Murray played domestic cricket only with a strong desire and focus on a legal and political career. He held the record of youngest Test captain for several decades until it was broken in 1957.

On 27 February 1980, Javed made his Test debut for the Pakistan side against the Australian team at the grounds of Karachi. He had a fantastic career as one of the youngest Test cricket captains.

In his career of a total of 34 matches, Javed registered 14 wins, six losses, and 14 draws as a captain. Pakistan’s board of selectors appointed Javed soon after Asif Iqbal’s retirement. Although he wasn’t the most experienced player on the side, his win on his captaincy debut against the Australian side showed his credibility to the world.

On 23 December 1957, Ian Craig registered his Test debut as a captain against the South African team at Johannesburg. In his overall Test captaincy career, he played 5 matches, had 3 wins, 0 losses, and 2 ties.

On 17 June 2009, Shakib made his Test captaincy debut for the Bangladesh side in a nail-biting match against West Indies, where he led the team to victory by 4 wickets.

Shakib Al Hasan is one of the most consistent cricketers from Bangladesh who holds the record of 1 win and eight losses in 9 matches of his Test captaincy career. He became the youngest Test captain of Bangladesh after being asked to lead the team when Mashrafe Mortaza got injured in a Test series against West Indies in 2009.

On 24 April 2003, Graeme Smith made his Test captaincy debut for the South African side. He led his team to a one-inning victory against Bangladesh at Chittagong.

Graeme Smith is a left-handed batsman who took over South Africa’s Test team captaincy after Shaun Pollock resigned. He is one of the best skippers ever who led his team for a total of 109 Test matches with 53 wins, 27 ties, and 29 losses.

On 1 December 1993, Waqar made his Test captaincy debut against Zimbabwe and led his Pakistan-side to victory by 131 runs at Karachi stadium.

When the skipper Wasim Akram got injured, the Pakistan team appointed Waqar Younis as their Test team captain against Zimbabwe in 1993. However, he was appointed as the regular captain in 2001, and his performance as a fast bowler was never dissatisfying. He holds a stunning Test captaincy record of 10 wins and seven losses in 17 matches.

On 23 March 1962, Mansur made his Test captaincy debut against the West Indies at Barbados. He played 40 Test matches for India in which he won 9 matches, lost 19 matches, and registered 12 ties.

Mansur is considered one of the best Indian Test captains who registered some classic and evergreen victories. When Navi Contractor got ruled out of the second test due to an injury, the Indian selectors appointed Mansur as the new Test leader of the side.

Until 2019, Tatenda Taibu held the record of the youngest Test captain in cricket history. He made his Test captaincy debut for the Zimbabwe side on 6 May 2004 against Sri Lanka.

Soon after Heath Streak’s resignation in 2004, Taibu was appointed as the Test captain for the Zimbabwe cricket team. In 10 Test matches, he registered nine losses and one tie, which clearly indicates that he wasn’t ready for the responsibility.

On 5 September 2019, Rashid broke all records to become the youngest Test captain ever for the Afghanistan side.

This spectacular spinner from Afghanistan was handed over the Test captaincy responsibility against Bangladesh in 2019.

All these Test captains have proved to be fantastic players of their time. Some Test captains may have performed really well with their captaincy skills, and some may have not. Until now, Rashid Khan holds the record of the youngest Test captain, and let’s hope who breaks this record again.