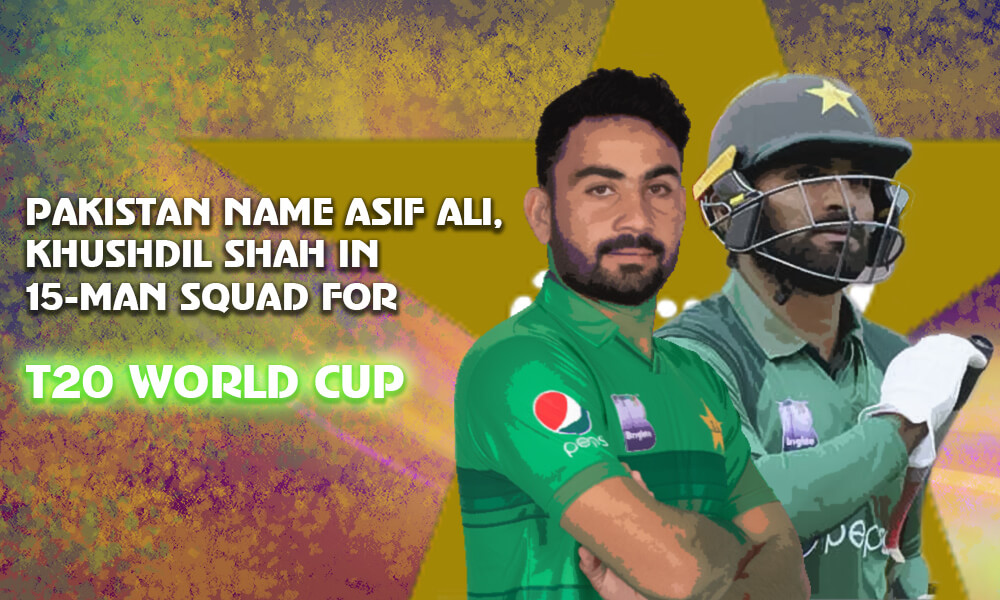 Khushdil Shah and Asif Ali have been recalled to the Pakistan squad for the T20 world cup scheduled to begin next month in the UAE. A 15-man squad has been named that will host New Zealand in five matches later in September in addition to playing two home matches versus England ahead of the global ICC event.

Md Wasim, chief selector of the PCB, has been quoted as saying to the media,

“We have tried to cover all our bases by catering for the modern-day brand of T20 cricket that will be required to perform strongly in the ICC Men’s T20 World Cup.”

Asif Ali has managed to keep the selectors’ confidence intact despite a poor run of form recently. The middle-order batsman who last appeared in the shortest format in April Zimbabwe averages 25.4 and boasts a strike rate of 121.65. Featuring in CPL 2021, Asif managed to score only 32 runs in his first five appearances in the league. Khushdil has played nine T20Is, averaging 21.00 with the bat. The left-hander last featured in an international game in Lahore versus South Africa in February.

Wasim admitted that while neither Khushdil nor Asif was in the best of form, they were among the best options for Pakistan. Addressing media, Wasim said,

“They are the best in the available pool of middle-order batsmen, and we remain confident that they will provide us solutions to our middle-order difficulties through solid performances. Asif and Khushdil will compliment Babar Azam, Mohammad Hafeez, Mohammad Rizwan and Shoaib Maqsood. In Imad Wasim, Mohammad Nawaz, and Shadab Khan, we have three top-quality spinners who are equally good with the bat and outstanding in the field.”

Paceman Arshad Iqbal, opener Sharjeel Khan, former skipper Sarfaraz Ahmed, and allrounder Faheem Ashraf have been omitted from the Pakistan squad for the world cup. All four featured in Pakistan’s most recent series versus England and West Indies. Md Rizwan is the first choice as keeper-batsman; the Pakistan selectors have added Azam Khan as his backup. Paceman Shahnawaz Dahani, Opener Fakhar Zaman, and Leg spin bowler Usman Qadir have been named as travelling reserves.

According to Wasim, the travelling reserves just missed out on selection to the main squad. “Sohaib Maqsood’s ability to bat and perform anywhere in the top-order has given him an edge over Fakhar, while the presence of three experienced spinners, who are also capable batters, and five genuine wicket-taking fast bowlers made it difficult for Usman Qadir to get into the side.”

Pakistan Will Begin Campaign Versus India

Pakistan will battle it out in Group 2 with Afghanistan, India, and New Zealand, apart from two qualifiers. Pakistan’s campaign will begin on October 24 when they face off against India. Australia, England, South Africa, and West Indies will feature in group 1, alongside two qualifiers.