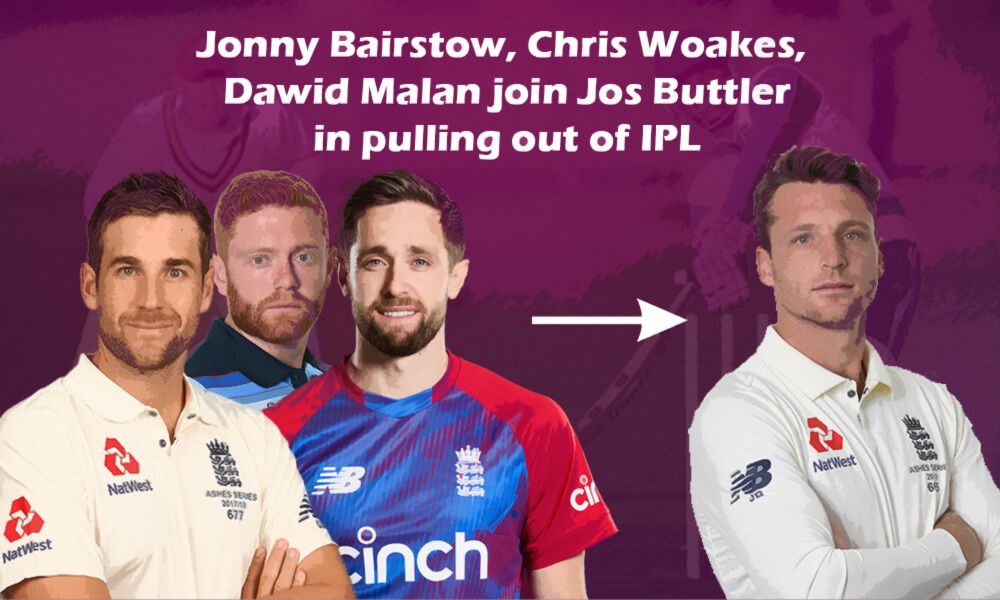 The second leg of the IPL will miss the presence of several all-format players from England. Dawid Malan (RR), Chris Woakes (DC), and Jonny Bairstow (SRH) have joined Jos Buttler (RR) in opting out of the league, citing bubble fatigue. The players have a long winter ahead, with the T20 World Cup and the Ashes series scheduled to take place over the next few months. Jos Buttler recently announced his decision to pull out, following in the footsteps of Ben Stokes and Jofra Archer who withdrew during the first leg.

The England T20 squad for the World Cup includes all of Buttler, Malan, Woakes and Bairstow. The four players could also be included in England’s squad for the Ashes. Consequently, the players are looking at a period of more than four months on the road. They would also have to fulfil hard quarantine requirements as they travel from one country to another. Both Woakes and Buttler have children — Buttler recently became a father for a second time. Every player taking part in the 2nd leg of the IPL which resumed on 19 September had to fulfil six days of isolation which could well have been the reason why the Manchester test was abandoned.

Jason Roy, Liam Livingstone, Adil Rashid, Chris Jordan, Eoin Morgan, George Garton, Tom Curran, Sam Curran, Sam Billings and Moeen Ali are the England players who are participating in the IPL. Of these, England may name Moeen Ali and Sam Curran in the Ashes squad, though Ali, reportedly a father of two, could opt out. Punjab Kings have replaced Malan with Aiden Markram for the 2nd leg, while Bairstow has been replaced at Sunrisers Hyderabad by Sherfane Rutherford.

The ECB is reportedly determined to go ahead with the Ashes and the cricket world could witness an understrength England side travelling to Australia for the series. The England players are reportedly perturbed by the uncertainty relating to flying to Australia in the pandemic era. The players have heard talk of being allowed a relatively soft quarantine at a hotel on the Gold Coast, including the prospect of golf. However, nothing is firmed up yet. Further, the privileges promised may not extend to the players’ families. The players may also have to fulfil additional quarantine requirements when the tourists move from state to state within Australia. As a result, several high-profile players are likely to opt out of the tour.

Speaking to the media, Tom Harrison, the chief executive of the ECB, said,

“Now that this (India) Test series has come to an early conclusion, that becomes priority number one for us to work through with the players. It’s a conversation which now takes the centre stage, because it’s looming large on the horizon.”