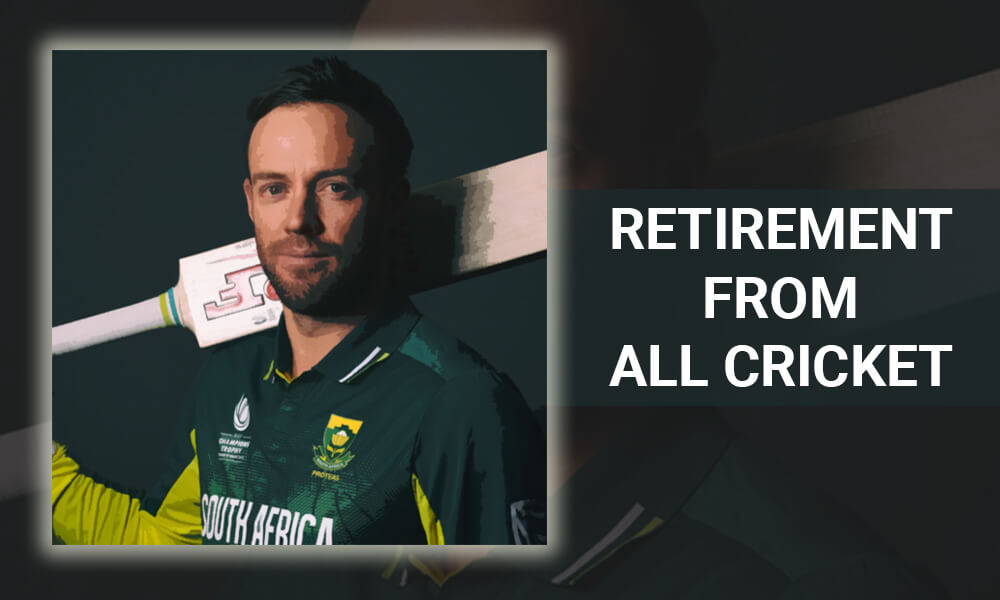 AB de Villiers has decided to quit cricket. His decision implies that De Villiers will no longer feature in the IPL for Royal Challengers, the franchise he has continued to represent after retiring from international cricket in 2018.

“It has been an incredible journey, but I have decided to retire from all cricket. Ever since the back yard matches with my older brothers, I have played the game with pure enjoyment and unbridled enthusiasm. Now, at the age of 37, that flame no longer burns so brightly.”

Brilliant Record in the IPL

De Villiers was last seen in the IPL in the 2021 season where he made 313 runs from the 15 games he played. Though the former South Africa star continued to feature in league cricket around the world, including the PSL, BBL, BPL, Vitality Blast, and South Africa’s MSL, he was seen most often in the IPL.

He has represented RCB since 2011, and during his tenure with the franchise has scored 4522 runs from 157 matches while registering a strike rate of 158.33. He is second only to Virat Kohli in terms of the number of runs scored for RCB.

Statement to the Media

In a statement to the media, De Villiers said, “It has been a memorable journey with RCB. Have so many memories on the personal front to cherish for the lifetime. I am a RCBian forever.”

“I have had a long and fruitful time playing for RCB. Eleven years have just whizzed by and leaving the boys is extremely bittersweet. Of course, arriving at this decision took a lot of time, but after a lot of contemplation, I’ve decided to hang up my boots and spend quality time with my family.”

“I would like to thank the RCB management, my friend Virat Kohli, teammates, coaches, support staff, fans, and the entire RCB family for showing faith and supporting me all through these years. It has been a memorable journey with RCB. Have so many memories on the personal front to cherish for the lifetime. RCB will always be very close to me and my family and will continue to support this amazing team. I am a RCBian forever.”

Since quitting international cricket in 2018, De Villiers has been hounded by the media wanting to know whether he considered returning to play white-ball cricket for South Africa, particularly in world cups. Ahead of the 2019 ODI World Cup, the ace batsman is reported to have told SA skipper Du Plessis that he was ready to play for South Africa at the ICC event, but his request for a recall was turned down by the selectors.

Linda Zondi, who was convenor of selectors at the time, revealed at the recent Social Justice and Nation-Building Hearings that, according to the selectors, recalling De Villiers would unfairly deprive a player already in the system of a place in the squad.

Despite his reputation for being the most creative batter from South Africa, De Villiers is in the throes of controversy arising from the SJN hearings where it was revealed that the star batter had pressured Hussain Manack, a former selector, to pick Dean Elgar instead of Khaya Zondo, for a one-day international game in India. While De Villiers did not deny the charge, he said that he had always made inputs considering the team’s “best interests.” The SJN authorities have not made public a responding affidavit made by De Villiers.

Reportedly, there were conversations between head coach Mark Boucher and De Villiers about the possibility of the RCB star playing for South Africa in the T20 World Cup. as it transpired, De Villiers decided to make his retirement permanent.