T Natarajan in Isolation After Testing Positive for COVID-19 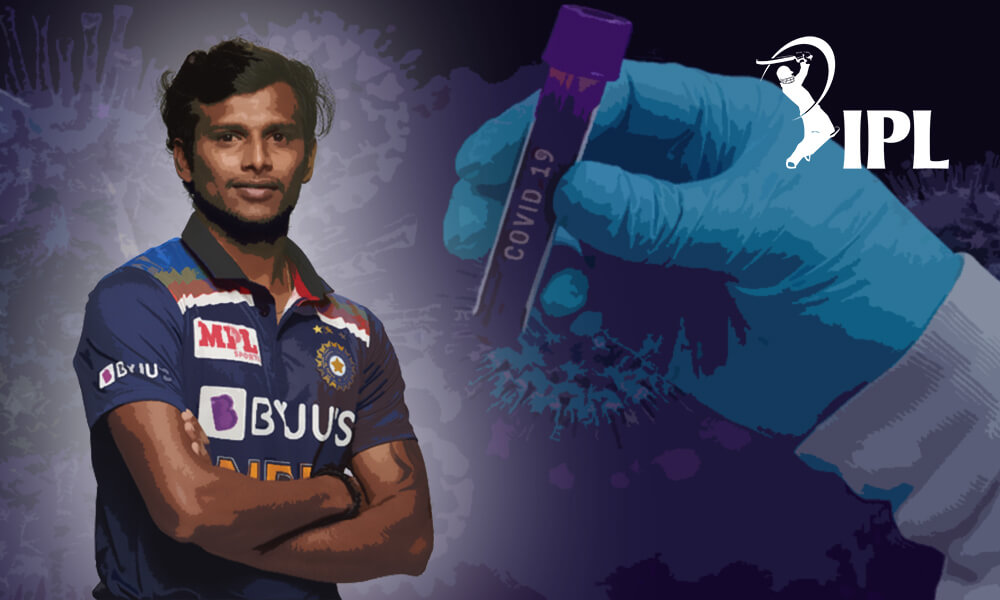 The scheduled RT-PCR test for players taking part in the IPL in Dubai turned out to be a curse for one player. T Natarajan, the left-arm seamer of Sunrisers Hyderabad, tested positive and had to isolate himself from the remainder of the team. Six other franchise members were identified as close contacts of the bowler were also sent into quarantine. According to an official IPL statement to the media, Natarajan has been classified as asymptomatic.

However, the positive test did not have any impact on the IPL as Sunrisers’ match versus Delhi Capitals on the same day went ahead as scheduled. Among the six close contacts, two — net bowler Periyaswamy and all-rounder Vijay Shankar — are players, while the other four — team manager Vijay Kumar, physiotherapist Shyam Sundar J, Doctor Anjana Vannan, and logistics manager Tushar Khedkar — are support staff.

Vijay Shankar and Natarajan took part in a training session of the franchise on the previous day. The whole contingent, including those identified as close contacts, are reported to have received negative RT-PCR tests done since. The majority of the franchise’s members — including Periyaswamy and Vijay Shankar — are reported to have arrived in the UAE from Mumbai on September 1. Natarajan is reported to have linked up with the rest of the squad later, after travelling in a commercial plane from Bengaluru on 9 September.

Isolation Protocols at the IPL

Every IPL participant was required to isolate for six days upon arrival in the UAE and was subjected to period testing. The test frequency was once every two days in the first week, followed by once every five days from week two onwards. As per the IPL protocols in place, any individual testing positive would have to quarantine for at least 10 days before being allowed to rejoin the bubble provided that they cleared tests on the ninth and tenth days.

Natarajan Only the 2nd SRH Player to Test Positive

Natarajan is the second Sunrisers player to have tested positive during the IPL 2021. During the first leg in May, wicket-keeper-batsman Wriddhiman Saha tested positive in Delhi and had to quarantine for two weeks. When Saha tested positive, the incident showed how vulnerable the IPL bubbles were, with members of the public reportedly seen loitering near the dressing rooms of teams at a ground used for training by Sunrisers.

Bigger Cause of Concern

Another cause for concern is the fact that the T20 World Cup is scheduled to be played from 17 October after the IPL in the same region of the world. In May, the BCCI was compelled to bring the IPL 2021 edition to a halt after a surge of COVID-19 cases inside various teams’ bubbles. Consequently, the BCCI decided to hold the second leg of the competition in the UAE where the 2020 edition had been held. Owing to the COVID-19 outbreak in India, the World Cup which was originally planned to be played in India was shifted to the UAE and Oman.

Natarajan’s positive test is yet another personal setback for the player who had recently undergone surgery following a knee injury he sustained after playing only two IPL matches. Natarajan was due to return to cricketing action in the IPL.