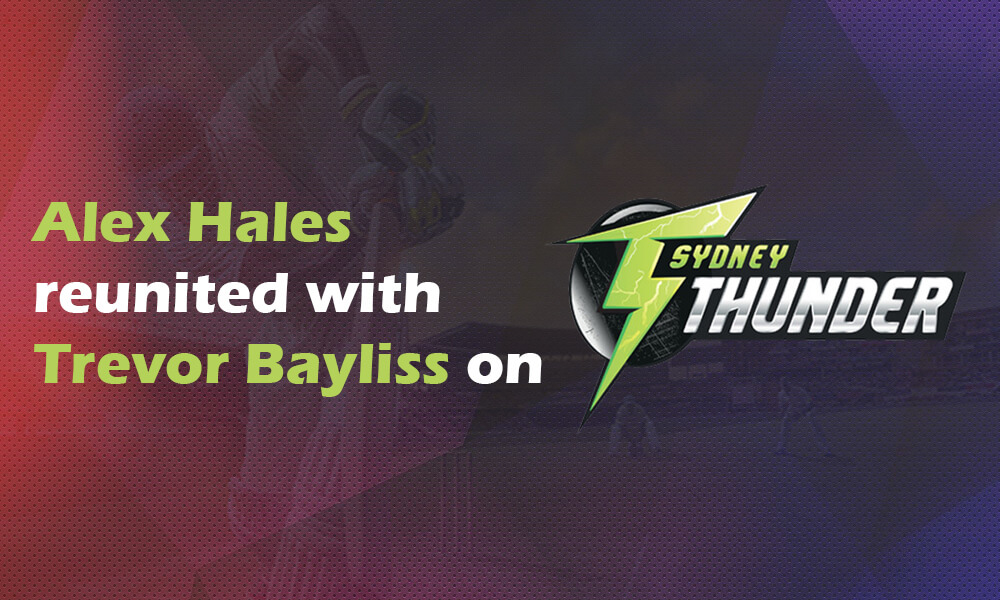 Alex Hales will reconnect with a former coach of England, Trevor Bayliss. This link-up will come for the first time since Hales was banished from the national side during the 2019 Cup. He has secured a deal allowing him to make a return to Sydney Thunder in the BBL cricket.

Alex Hales has not been a part of the England team since he failed two consecutive recreational drug tests before the start of the tournament.CCBut following the Ashes, Bayliss was hired as the coach during that summer.

He was unnoticed for a recall when the team was selecting a new ODI squad for the upcoming series against Pakistan at the start of this year after the pandemic outbreak within the original group.

Over the last two seasons, Hales has been great for Thunder with 543 runs and 576 hauls that include a top score of 110 in the campaign of 2020-2021. He had a significant contribution in Thunder reaching the knockout final where they were defeated by Brisbane Heat.

Additionally, the BBL player has recently completed the T20 Blast tournament with Nottinghamshire. He has performed impressively well scoring 482 runs at 43.81 with a strike rate of 178.51. During this tournament, Hales made the fifth century of his cricket career.

In an interview, Hales said that he found the culture of Sydney Thunder both off-field and on-field quite special. He is excited to get another opportunity to be a part of the team again. He further added that in the last two seasons, he had witnessed how the team had built a squad that strongly believed that they could win the BBL. As the tournament approaches, there will be more updates on the teams and their preparation for the league.

Ahead of the new BBL season, Thunder has locked 14 players with one more overseas player left to sign. The team has also not announced who their captain would be after the departure of Callum Ferguson. As per the reports, Usman Khawaja seems to be everyone’s favourite.

Additionally, overseas players will have to undergo mandatory two weeks of quarantine when they arrive in Australia due to COVID-19 restrictions. It is yet to be decided whether all clubs will be able to complete their slots.

Fringe England players continue to be highly popular as a large number of them are already in Australia, with the England Lions fixture lined up at the same time as the Test series. But anyone associated with the Lions match, which will be held from December 9 to December 12, will not be able to play the early matches of the BBL cricket. Additionally, England also has an ODI series in the West Indies later in January. This means players selected for the ODI tour will not be a part of the BBL.

The Big Bash League 2021-2022 will start on December 5, with Sydney Sixers taking on Melbourne Stars. The match will be held at the Sydney Cricket Ground. The league will continue until January 28, 2021.