Most Runs in a Test Series 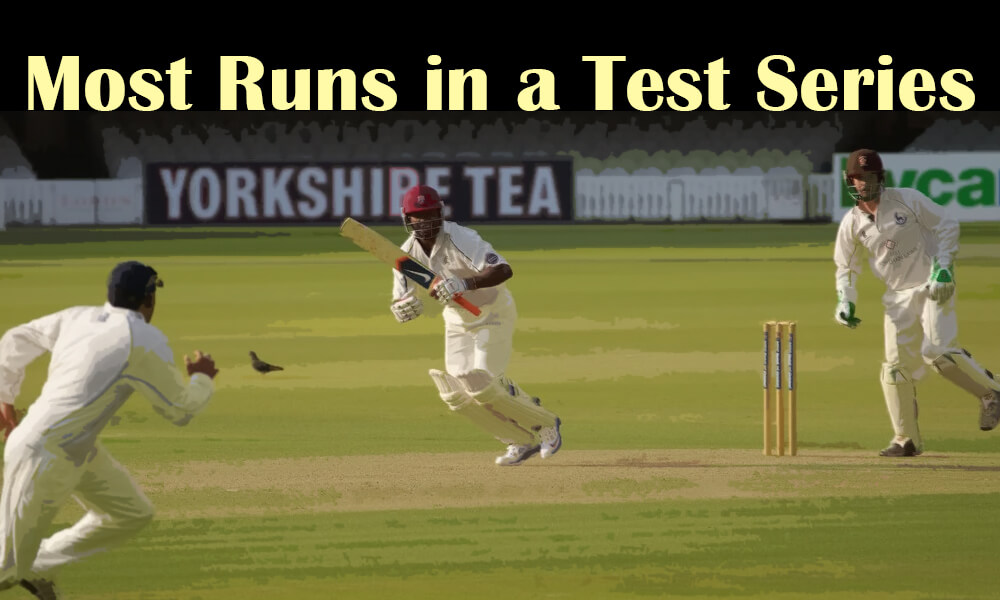 Batsmen with Most Runs Scored in a 6-Match Test Series

Former Australia skipper Mark Taylor set the record for the most runs in a 6-match Test series during the Ashes in 1989. In the first match in Leeds in June 1989, the left-handed opener scored 136 and 60. In the second match at Lord’s, later that month, Taylor had scores of 62 and 27. In the third match at Birmingham, Taylor made 43 and 51. In the fourth Test at Manchester, he scored 85 and 37 not out. Taylor scored 219 in his only innings, in the fifth at Nottingham. In the last match of the Ashes at the Oval, Taylor registered innings of 71 and 48. Incidentally, this was only his second Test series, after Taylor made his Test debut against West Indies in January 1989.

Batsmen with Most Runs Scored in a 5-Match Test Series

In what was only his second series, Australian batting legend Don Bradman scored 974 runs in a 5-match Ashes series on Australia’s tour of England in the summer of 1930. In the first match of the series in Nottingham, in June 1930, Bradman made 8 and 131. He followed up on that performance by registering scores of 254 and 1 in the second match at Lord’s later that month. In the third match at Leeds in July, Bradman scored 334 in his only innings. Incidentally, this was the highest score of his Test career. In the fourth match in Manchester, later the same month, the Don was out cheaply for 14 in his only innings of the game. He rounded off the Ashes with an innings of 232 in the last game at the Oval, in August 1930. Incidentally, this has remained the record for the highest number of runs in a series of any length, since it was set nearly 92 years ago.

Batsmen with Most Runs Scored in a 4-Match Test Series

In the summer of 1976, West Indies toured England for a four-match Test tour. In the first match in Nottingham in June 1976, Richards scored 232 and 63. In the 2nd match in July in Leeds, he made 4 and 135 in the two innings. In the 3rd match later that month in Manchester, Richards registered scores of 66 and 38. In the last match of the series in August at the Oval, the West Indian batting legend made his highest Test score of 291, to aggregate 829 runs in the series.

Batsmen with Most Runs Scored in a 3-Match Test Series

In the summer of 1990, India toured England for a three-match Test series. England opener Graham Gooch began the series with an innings of 333 in the first match at Lord’s in July 1990. He followed it up with a knock of 123 in the second innings to register 456 runs in the match, setting a record for the most runs in a Test match that has remained unbroken. In the next match in Manchester, in August 1990, Gooch scored 116 and 7. In the final match, later that month, at the Oval, He rounded off his tally with innings of 85 and 88.

Will any batter break Don Bradman’s record of 974 for the most runs in a series? That seems highly unlikely, especially in an era in which we witness Test matches getting over in four days. Hardly any batsman today has the Don’s dual ability of scoring at a brisk rate while spending more than a day at the crease. The closest anybody came to Bradman’s record in recent times was Mark Taylor who made 839 runs in an Ashes series in 1989. However, those runs came in 11 innings of a six-match series. Bradman needed only 7 innings to accomplish his feat.