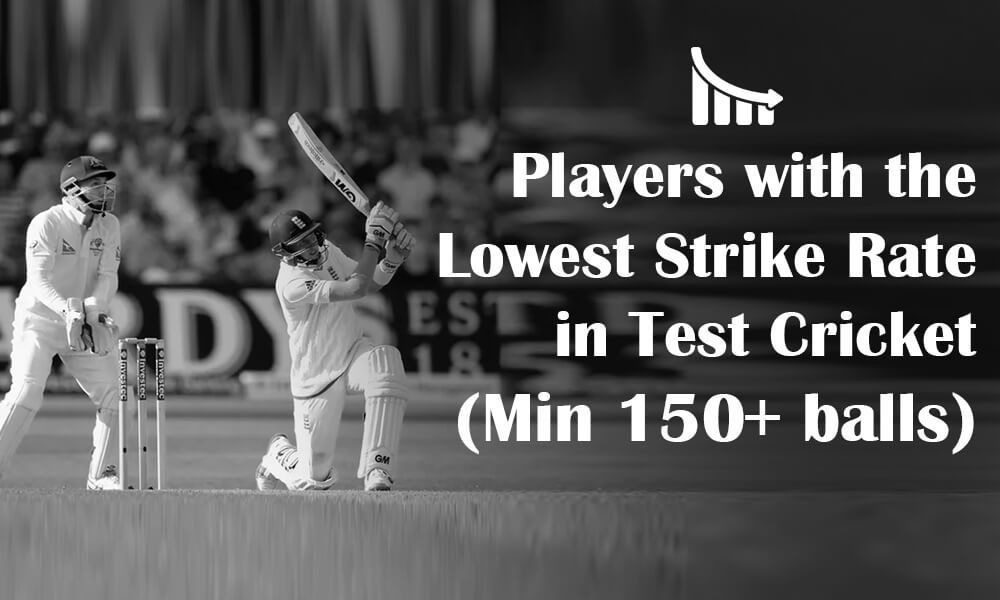 Test cricket is that format of the game in which solely outscoring the opponent is not enough to win the game. Certain situations demand the batsman to consume an ample number of deliveries and to not lose their wicket to earn their team a draw. This aspect of Test cricket is what makes the game so enthralling as the game is not over until every wicket falls and there is always a chance for the batting team to put in a resilient display resulting in the match ending up as a draw.

Below, we’ve put together a list of such innings that feature some of the lowest strike rates in Test cricket batting in which the batsman has consumed several deliveries from the opposition and has shown great application and concentration during his stay at the batting crease.

In a Test match against India during which South Africa was faced with a target of 481 runs in the fourth innings of the match, Hashim Amla and AB de Villiers put on one of the most resilient partnerships in history of Test cricket. The South African duo was part of a 27-run partnership during which they faced 253 balls before they were ultimately dismissed.

Hashim Amla scored just 25 runs off the 244 balls that he faced at a strike rate of just 10.24, which became the innings with the lowest strike rate in the history of Test cricket (over 100 balls faced). Despite the grit shown by the South African batsman, India ended up winning the match by a massive total of 337 runs.

Jack Russell played out one of the best innings in Test history as England avoided defeat against South Africa in the year 1995. Having set a target of 479 for England, South Africa was well on their way to dismiss the English batsmen until along came Jack Russell. Russell showed great resilience as he remained unbeaten on 29* after facing 235 balls at a strike rate of just 12.34. England ended up with a score of 351 for the fall of 5 wickets with the match ending as a draw.

The English wicket-keeper batsman Jos Buttler is well known for his incredible striking ability. But in the recently concluded Ashes Test series, Buttler played an innings that nearly helped England draw the Test match. Having to chase 468 runs in the 4th innings, England was staring defeat as wickets fell at regular intervals but Buttler seemed resilient. Playing a defiant knock, Buttler managed to score a total of 24 runs after facing 207 balls at a strike rate of just 12.56. After his dismissal, the other England wickets fell easily and Australia won the match by 275 runs.

Sri Lankan batsman Aravinda de Silva etched his name in the history books when he played an innings that was starkly different from his intuition. In the second Test match between Sri Lanka and Zimbabwe, Sri Lanka was in a bit of a bother having to follow on after being dismissed in their first innings for 218 runs.

The start of the second innings for Sri Lanka was just as bad as their first innings as the team lost early wickets. However, Aravinda de Silva batted out skillful innings in which he scored 27 runs after facing a total of 191 balls at a strike rate of just 14.13. With the help of de Silva’s patient innings, Sri Lanka was able to save the Test match and consequent the Test series.

As mentioned earlier, South African duo Hashim Amla and AB de Villiers were involved in a 27-run partnership during which they faced 253 balls, before they were ultimately dismissed. While Hashim Amla scored just 25 runs off the 244 balls that he faced at a strike rate of just 10.24, AB de Villiers also batted out a very patient knock. De Villiers scored a total of 43 runs during his stay at a crease after facing a total of 297 balls at a strike rate of just 14.47.

The efforts of the South African duo went in vain as India went to win the match by a total of 337 runs but the partnership that Hashim Amla and AB de Villers put on to try and draw the Test match is widely regarded as one of the most resilient partnerships in the history of the game.

Additionally, given that the wicket in Delhi was a turning track and overseas players are alien to such batting conditions, the efforts and concentration required to play out such a skillful knock by the South African batsmen is truly a herculean feat that will be hard to emulate in the times to come.