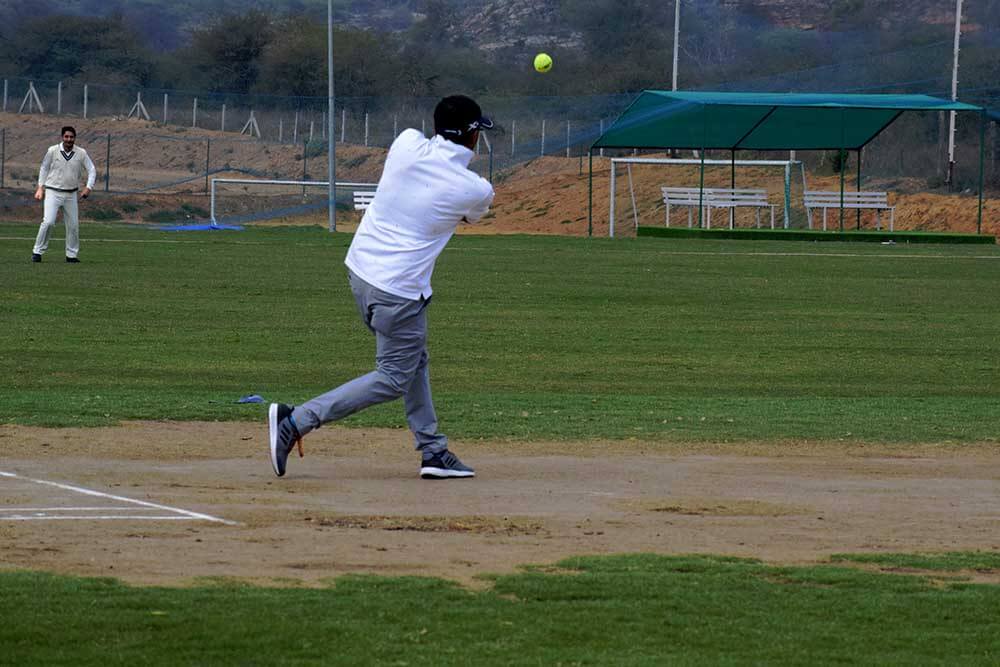 On April 14, 2021, SRH will play against RCB at the MA Chidambaram Stadium in Chepauk, Chennai. Both teams have played one match at this venue and are familiar with the pitch and weather conditions. RCB has won their first two points in the tournament and has begun the tournament with a victory, while SRH was defeated by KKR in their first match and has yet to win an IPL match.

SRH and RCB have played each other 18 times, with SRH winning 10 and RCB winning 8. Both teams have been heavyweights in the tournament and are equally capable of contending for the IPL trophy. SRH and RCB also met in an IPL final in 2016, with SRH emerging victorious and winning their first title. Since they all played at the same venue where this match will be played, both teams will have an advantage of learning each other’s weaknesses.

SRH, a team known for its well-equipped bowling attack, has become one of the IPL’s most successful franchises. This team has attempted to overcome problems with the lower middle order in their batting lineup, and we may see some improvements in this area in the coming matches.

David Warner and Jonny Bairstow are the batting order’s guiding force; they have been SRH’s strong pillars, and the batting unit of SRH heavily relies on these two batsmen. The experienced domestic batsmen in this squad are Wriddhiman Saha, Kedar Jadhav, and Manish Pandey. Saha has taken over as opener, with Manish Pandey filling in the middle order. To help SRH win games, these two batsmen will have to take on more responsibility and strengthen the batting unit. Abdul Samad is a young talent in this team; he has been performing as the team’s finisher and has shown exceptional cricketing abilities.

Bowling is this team’s strength; Rashid Khan and Bhuvaneshwar Kumar are its most successful bowlers. Khaleel Ahmed, Sandeep Sharma, Siddarth Kaul, and T Natarajan are among the young Indian players on this squad. Rashid Khan and Mohammad Nabi, an Afghani duo, lead the spin attack for SRH, with Mujeeb ur Rahman another capable spin alternative in this squad.

Though SRH made a few changes to their squad in the IPL 2021 auction, the franchise did not make any major changes to their playing 11 in order to address their issue with a poor middle order in their batting unit. It is predicted that a few improvements will be made before this team’s next match.

Royal Challengers Bangalore defeated Mumbai Indians in their previous match, and they will undoubtedly want to maintain their winning streak in this tournament.

In the absence of Devdutt Padikkal, this team’s opening pair is Virat Kohli and Washington Sundar. Washington Sundar has the potential to bat well, but opening is not the place for him to bat. For RCB, AB de Villiers has taken on the task of finishing the innings. The addition of Glenn Maxwell to the batting order has enhanced RCB’s batting strength.

Yuzvendra Chahal is the RCB’s leading bowler. He has been heading the RCB bowling unit and has been effective in claiming wickets for the team when required. Harshal Patel, a wild card in the RCB team, took 5 wickets in their first match against the Mumbai Indians. RCB’s fast bowling attack will be led by Mohammed Siraj and Kyle Jamieson. Additional bowling options, such as Washington Sundar and Dan Christian, provide RCB with a wider range of bowlers.

RCB has played really well in their 1st match and have performed well as a team. Apart from the opening by Washington Sundar which reduced RCB’s run rate in the initial overs of the power play. 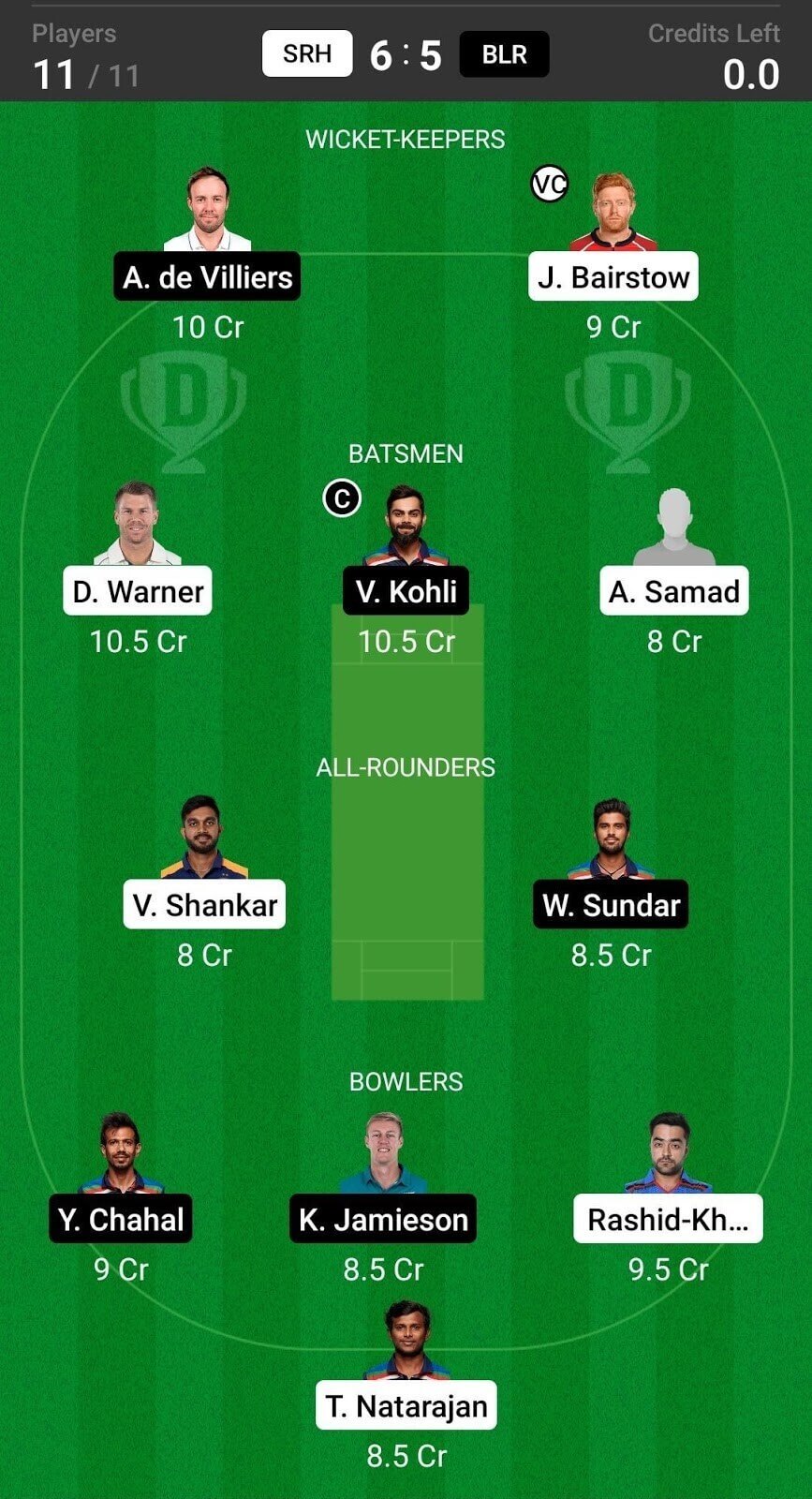 This is a crucial match for both teams because taking the lead in the points table early in the tournament would put the team at ease in qualifying for the playoff stages. RCB will want to keep winning and earn another two points for their side, while SRH will be looking for their first victory.

In this Dream11 team, we have three batsmen – David Warner, Virat Kohli, and Abdul Samad. In T20 cricket, David Warner and Virat Kohli are recognised for their explosive batting. Abdul Samad is a young talent who excels at hitting the bowl for boundaries. He will contribute quick points to your Dream11 squad. Because of their significance and records in the T20 format as well as the IPL in the past, AB de Villiers and Jonny Bairstow are must-haves in this Dream11 team.

Yuzvendra Chahal and Kyle Jamieson are our RCB bowling choices, while Rashid Khan and T.Natarajan are our SRH bowling picks. The pitch at this venue is dry and slow, and it is known to favour spin bowlers. Yuzvendra Chahal and Rashid Khan will be successful here, and they could be game-changers for their respective teams. Washington Sundar and Vijay Shankar are on this team because of their ability to contribute with both the bat and the bowl.

We believe a total of 170-180 is a fair total for the venue. Though spinners will have the upper hand in this match, spending more time on the pitch will make it easier for batsmen to score runs. Please choose your team wisely.