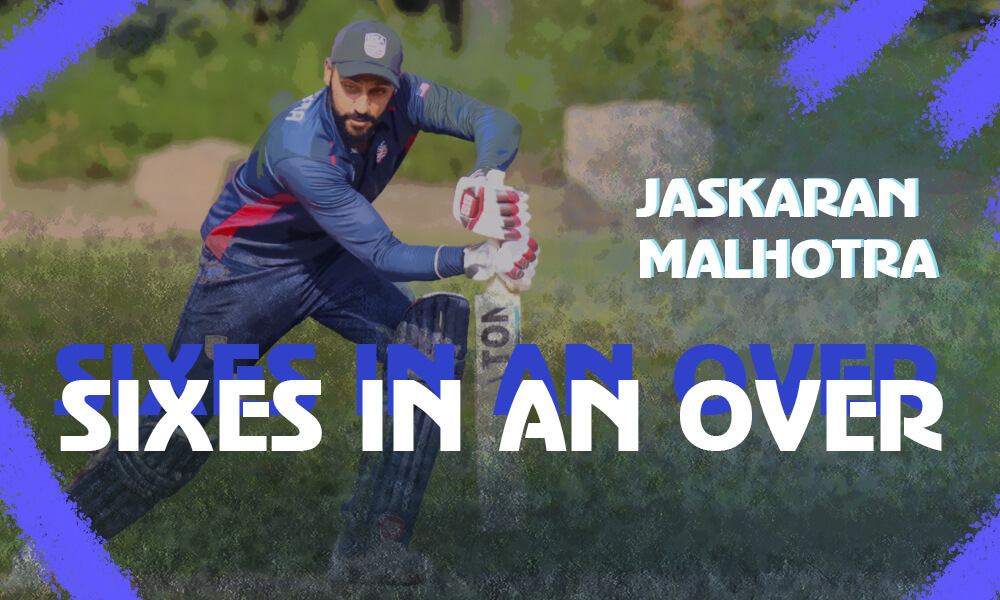 Jaskaran Malhotra celebrated his return to international cricket by scoring the USA’s first ODI hundred against Papua New Guinea on 10 September. Malhotra last played for the national side in their first ever ODI that they hosted back in September 2019. The icing on the cake was a feat of six sixes in the 50th over that helped Jaskaran to finish with an unbeaten 173 in his team’s total of 271 in the 2nd ODI of a two-match series at Al Amerat.

Malhotra Hits Six Sixes in an Over

PNG paceman Gaudi Toka was given the ball to bowl the last over of the innings. He chose to bowl over the wicket, with the apparent aim of bowling wide yorkers. But as events unfolded, Toka got his length wrong on his first three balls, and Malhotra duly punished the transgression, with sixes over the long on, extra cover and long off boundaries. When the bowler opted to bowl the fourth ball around the wicket, Malhotra left his stumps exposed as he fetched the ball from a foot outside the off stump to send it sailing over the wide long on fence. Ball number five was met with a straight driven six over long off. The last ball of the over was a full toss bowled at waist height that Malhotra despatched over square leg to enter the record books, following in the footsteps of Yuvraj Singh (T20I), Herschelle Gibbs (ODI), and Kieron Pollard (T20I) to become the fourth man to smash six sixes in an over in an international match.

At the start of his innings, Malhotra had a List A average of 19.70 from 25 games played for the USA. He boasted a top score of 80 that he made in his debut innings against Guyana in the CWI Super50 competition in February 2018 in Antigua. In his latest knock, Malhotra saw his List A average more than double, albeit with a little help from Lady Luck. Jaskaran’s innings was helped along by some sloppy fielding from PNG, with dropped catches. He brought up his fifty off 48 balls with sixes off successive balls from Vala in the 28th over. Malhotra, who reached 76 with a pair of sixes against Amini in the 34th over, batted cautiously through his nineties to get to his ton on the 102nd ball he faced. Once past the hundred, Jaskaran went on the rampage, scoring the remainder of the runs in only 22 deliveries.

He took a single off the last ball of the 49th over bowled by Ravu to ensure that he enjoyed strike in the last over in which he would create some more history. In the course of his knock, Malhotra broke AB De Villiers’s record for the highest score by a number seven batsman and was involved in the USA’s highest stand for the 10th wicket. His partner, Saurabh Netravalkar, made just one run in the unbroken 55-run partnership. In reply, PNG were bowled out for 137, making the USA the winners by 134 runs, to sweep the series 2-0.