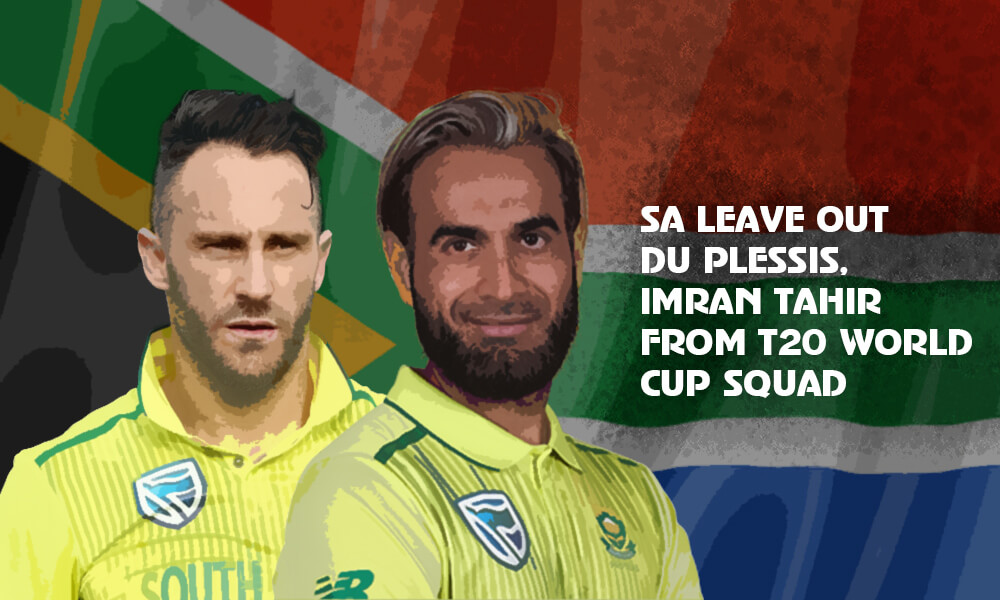 Cricket South Africa have left out Faf du Plessis from SA’s squad for the T20 world cup though the former skipper had announced his availability to play in white ball international games. When Du Plessis quit test matches in February 2021, he stated that he wanted to play in the upcoming T20 world cup. However, his last appearance in a white ball game for South Africa was back in December 2020.

CSA have likewise left Imran Tahir out of the world cup squad. The spinner quit ODI cricket after the 2019 world cup but continued to be available for T20Is. Chris Morris, a seamer with all-round ability, has not played any international games for two years, has also been ignored. CSA is reported to have largely ignored players without national contracts (awarded in 2020).

According to media statement by Graeme Smith, CSA’s director of cricket,

“With Faf we struggled to find that balance and outside that, Chris made himself unavailable and from there we felt Imran had a great run, he is still being successful, but we are confident in the current crop of spinners we are developing, and we felt we should give them the opportunity.”

Three frontline spinners — Bjorn Fortuin, Keshav Maharaj and Tabraiz Shamsi — have been included in the squad. George Linde has been added as a backup player. Linde’s non-inclusion could raise eyebrows as the spin-bowling allrounder actively featured for the national squad during the South African winter. While Fortuin appeared in only one T20I game on the SA tour of West indies, Linde played in all five games.

According to selection convener Victor Mpitsang,

“When it comes to George, he is one of the allrounders. He has done well with the ball, but we have gone with the seam-bowling allrounders.”

The SA squad for the world cup has two allrounders, Dwaine Pretorius and Wiaan Mulder, with Andile Phehlukwayo added as a backup. Pretorius was out of the game after a rib fracture sustained in Pakistan in February 2021. While all three players are on tour in Sri Lanka, Pretorius has featured only in the T20Is.

Bavuma Expected to Recover in Time from Injury

Temba Bavuma, who left the Sri Lanka tour midway owing to injury, is likely to recover in time to skipper the side in the world cup. Recuperating after a surgery on a broken thumb, Bavuma expects to be match-fit by mid-October. “Mentally, that’s what I am working around. That gives me ample time to get ready for the World Cup.”