History of Cricket in Pakistan 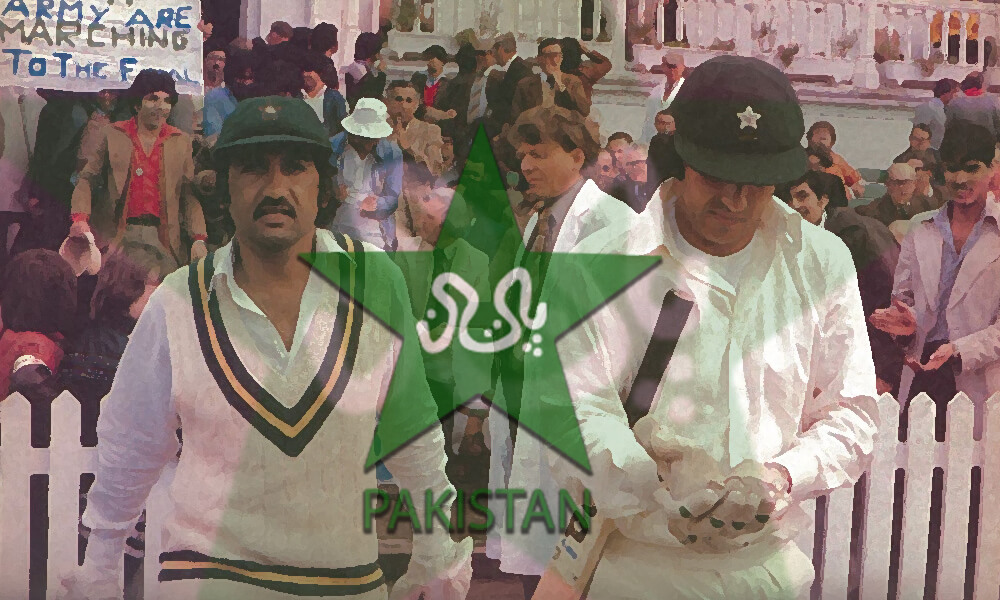 Cricket is not only a sport in Pakistan but also a religion that unites the entire country, stops work and brings happiness to millions. Since the creation of Pakistan in 1947, cricket has seen many ups and downs in the country. From winning the ODI World Cup in 1992, a T20I World Cup in 2009 to getting hit by fixing scandals, Pakistan has faced everything that is served in their platter to become a reckoning force in the world of cricket. Let’s have a look at the history of cricket in Pakistan across all formats.

12 years before the country became independent, Pakistan had hosted their first-ever cricket match in Karachi between Sindh led by Ghulam Mohammad and the Australian cricket team led by Frank Tarrant. Over 5000 Karachiites experienced this event at that time. After the country’s independence in 1947, the development of cricket started pacing rapidly. In 1951, the Pakistan cricket team showed their worth against Nigel Howard’s MCC team. Following a recommendation from India at a meeting of the Imperial Cricket Conference (now known as International Cricket Council) at the Lord’s, Pakistan was awarded Test match status. Pakistan had only two turf wickets by the time.

Since 1952, Pakistan has created many legends including Hanif Mohammad, Fazal Mahmood, Imran Khan, Wasim Akram, Shahid Afridi, Sana Mir and many more. Pakistan cricket has proven its worth by adding 2 World Cups and a Champions Trophy to their list of trophies. In 1997 Pakistan added a new feather on their cap when Pakistan women’s cricket team made their debut in international cricket against New Zealand.

In 1952, Pakistan toured India to play their first-ever Test. The first Test started in Delhi on October 16. Pakistan lost their first Test by an innings and 70 runs chasing 372 runs total of India from the first innings. But they came back stronger in the second Test in Lucknow. After restricting India at 106 in the first innings, thanks to Fazal Mahmood’s 5 wickets, Pakistan put 331 runs on the board. Nazar Mohammad scored an unbeaten 124 and became the first Pakistani player to score a century. Pakistan bowled out India on 182 to win the Test by an innings and 43 runs. Fazal Mahmood was impressive again with 7 wickets for 42. Unfortunately, Pakistan lost the series 2-1. 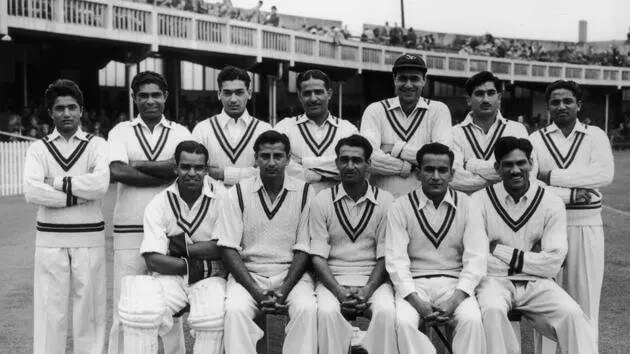 In 1954, Pakistan travelled to England for a 4-match Test series and became the only team to win a Test in England on a first visit. Pakistan won the 4th Test at The Oval by 24 runs and drew the series. From 1954 to early 1958, Pakistan didn’t lose a series and also remained unbeaten at home. They drew against India (0-0), won against New Zealand (2-0) and Australia (1-0). On their next tour to the Caribbean, Hanif Mohammad became the first player from Pakistan and 6th overall to score a triple century while batting for 9 consecutive sessions. 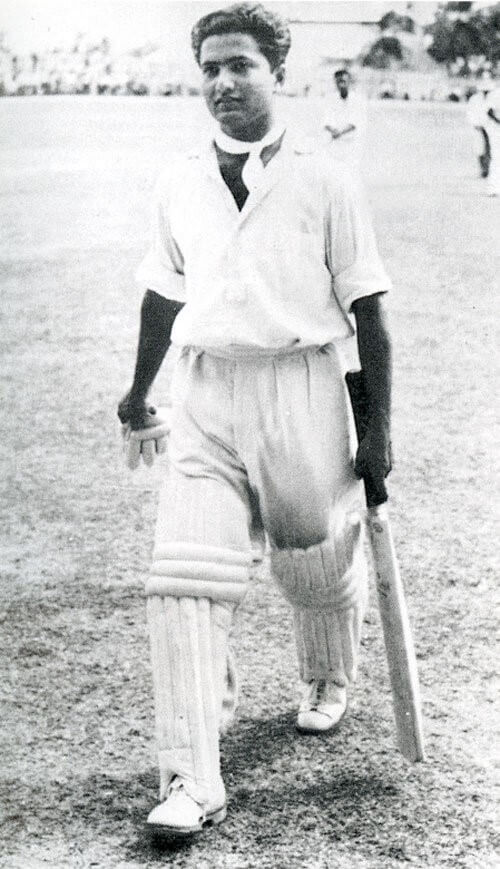 Between 1970-79, Pakistan Test cricket achieved some below-par results. They played 44 Tests, won 9, lost 12 and drew 23. However, they turned the tables in the next decade. Out of 81 Tests they played, they won 22, lost 13 and drew 46. In 1999, Pakistan won the Asian Test Championship by beating Sri Lanka in the final with an innings and 175 runs. The 2006 calendar year brought to Pakistani cricketer Mohammad Yusuf inclusion in the records book. In the 19 innings of 11 Tests, Yusuf scored 1788 runs at a mammoth average of 99.33. He scored 9 centuries in that year including a personal best of 223.

In 2009, a bus travelling with Sri Lankan players in Lahore was attacked by terrorists that injured two of the Lankan players. This cost Pakistan a lot after teams rejected travel to Pakistan. In 2010, Pakistan cricket was hit by a spot-fixing scandal that saw Salman Butt and Mohammad Asif getting a lifetime ban while Mohammad Amir getting a 5-year ban. PCB handed over the captaincy to Misbah-ul-Haq to build a fresh start. Misbah went on to win 5 and draw 2 in his first 7 series. They whitewashed England for the first time in the UAE.

By 2016, Pakistan reached the top spot in the ICC rankings. They won 3 series on a trot and drew the 4th against England that included a memorable victory at the Lord’s by 75 runs with only 3 minutes of the play remaining.

Currently, Pakistan are ranked 5th after coming 6th in the first instalment of the ICC Test Championship. In 446 Tests played so far, they have registered 142 wins, 133 losses and 162 draws. 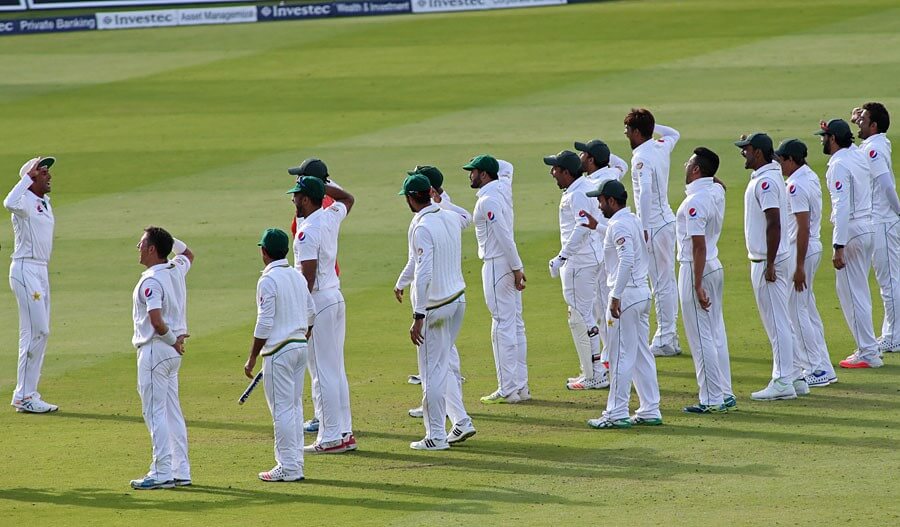 Pakistan players celebrating victory at the Lord’s in 2016 (source)

Pakistan jumped into the world of ODI cricket in 1972. In February 1972, they played their first ODI against New Zealand but lost by 22 runs while chasing the target of 188 runs. A year and a half later, they travelled to England and beat them 2-0, hence registering their 1st ODI win and the series win. In the inaugural World Cup 1975, they registered their first victory by beating Sri Lanka in the last group stage game by 192 runs.

In 1986, Pakistan won the first Austral-Asia Cup. The final became the most memorable in the history of Pakistan ODI cricket. Playing against their archrivals India, Pakistan needed 4 runs on the final ball of the game and had only one wicket in hand. Javed Miandad hit a six on the last ball bowled by Chetan Sharma to win the cup. 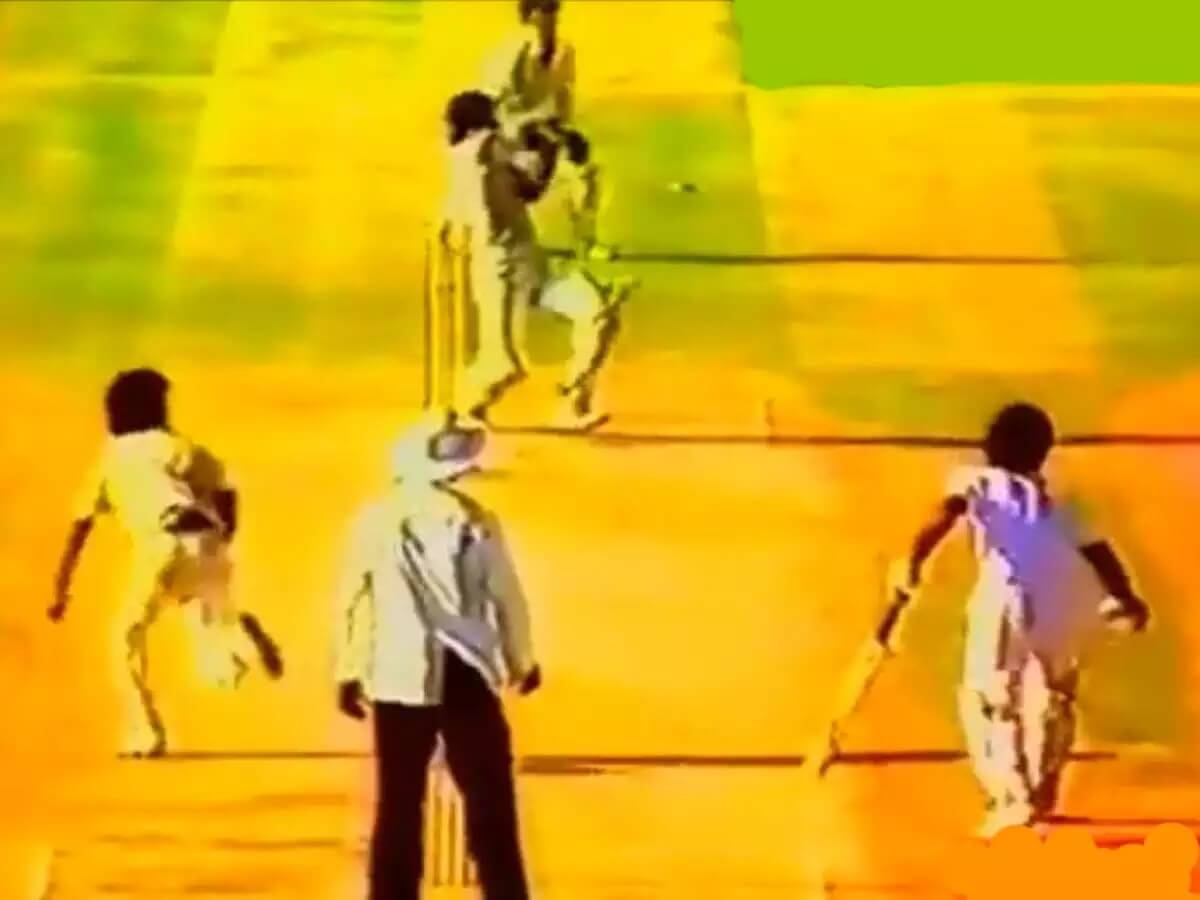 Miandad hitting six on the last ball of the final (source)

Pakistan reached the semifinals of three consecutive editions of the World Cup (1979, 1983, 1987). It was the ICC World Cup 1992 where Pakistan cricket reached the epitome of ODI cricket. Skipper Imran Khan led his team to win their first and only ODI World Cup. Batting first Pakistan set a target of 250 runs with centuries from Khan and Miandad. They bowled out England on 227 to win the final by 22 runs. Wasim Akram was awarded man of the match for his 3 wickets for 49. 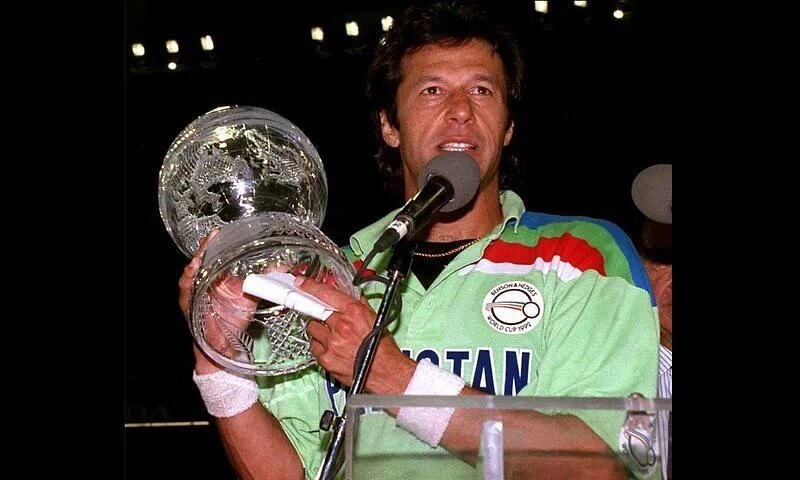 Pakistan reached the final of the World Cup 1999 but lost to Australia. In the 2007 World Cup, Pakistan crashed out in the group stages after losing to Ireland. The controversial death of coach Bob Woolmer a day after Pakistan crashed out hit Pakistan cricket badly. In the 2011 ODI World Cup, Pakistan lost to India in the semifinals. But they took revenge in the ICC Champions Trophy 2017. At the Oval, Pakistan scored 338 runs batting first with a century from Fakhar Zaman. Mohammad Amir and Hasan Ali took 3 wickets each to bowl out India on 158. Pakistan won the final by 180 runs and lifted their first ICC Champions Trophy. 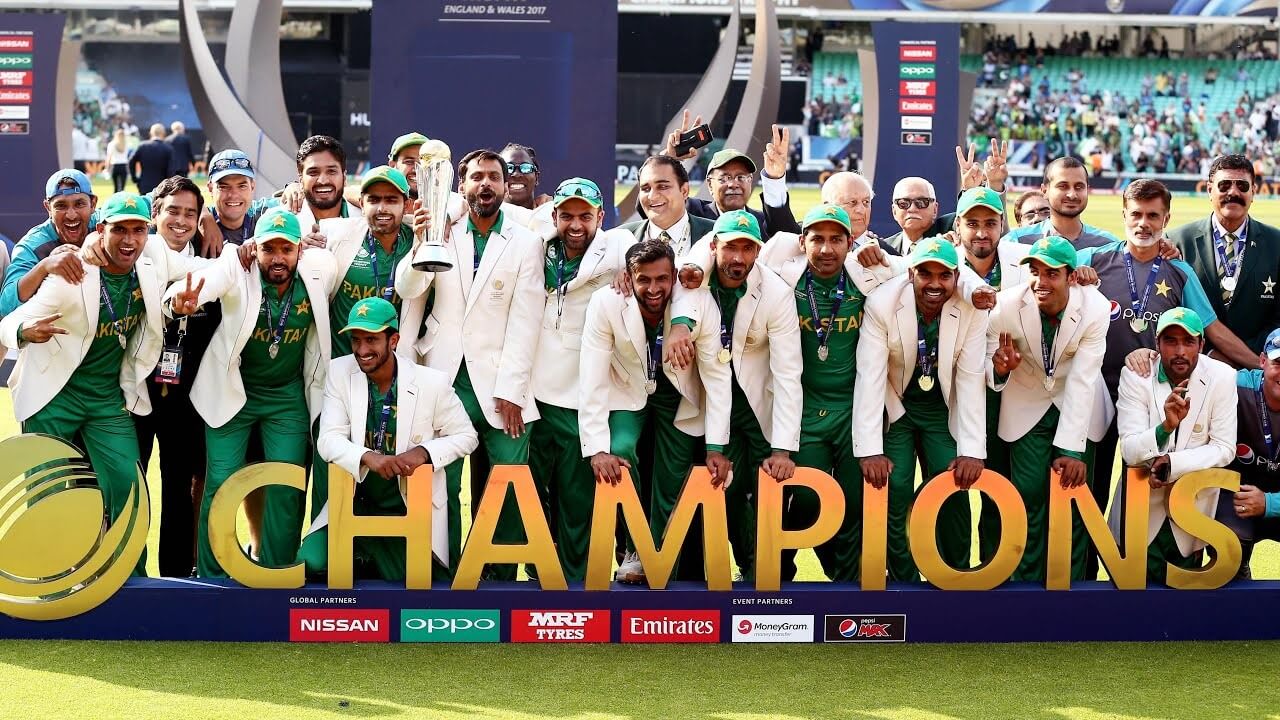 On August 28, 2006, Pakistan played their first T20I. They beat England by 5 wickets with 13 balls remaining while chasing 145 runs in Bristol. In 2007, South Africa handed Pakistan their first defeat. Pakistan set a target of 130 runs which the hosts chased without a loss. Pakistan played the inaugural ICC T20I World Cup in South Africa and reached the final. In the nail-biting game, India set a target of 158 runs. Pakistan came so close to the chase that 6 runs were needed in the last 4 balls of the game. But a miscalculated shot from skipper Misbah-ul-Haq broke the hearts of the team and the fans. 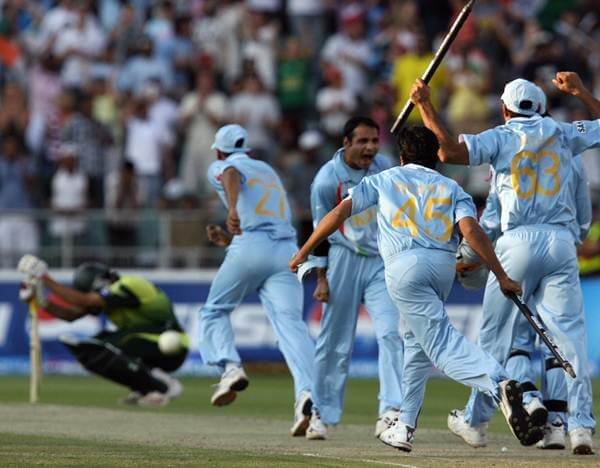 Nevertheless, they rose big on the next occasion. In the second edition of the World Cup held in England, Pakistan beat Sri Lanka in the final by 8 wickets to lift their first T20I title. Batting first Sri Lanka was restricted to 138 runs for the loss of 6 wickets. Pakistani all-rounder Shahid Afridi scored 54 of 40 balls to win the World Cup with 8 wickets and 8 balls in hand. In the next World Cup, they reached the semifinal and set a target of 192 runs against Australia. But Michael Hussey’s 64 off 24 balls broke their chances of appearing in the third final and hence conceded the title to England. Pakistan suffered the same result in the 2012 ICC World T20. This time they lost to Sri Lanka in the semifinal by 16 runs.

The 2014 and 2016 campaigns turned out to be a disaster after Pakistan failed to qualify for the semifinals for the first time since the start of the ICC World T20I. They lost all their group stage games in the 2016 campaign. In 2018, the ICC updated T20I rankings based on the results from the 2015-16 and 2016-17 cycle which saw Pakistan securing the 1st rank in the table with 130 points.

Currently, Pakistan are ranked 4th in the ICC T20Is points table and are ready to go for the ICC World Cup 2021 which will be held in the UAE. In 177 T20Is, Pakistan have 107 victories and 65 losses. 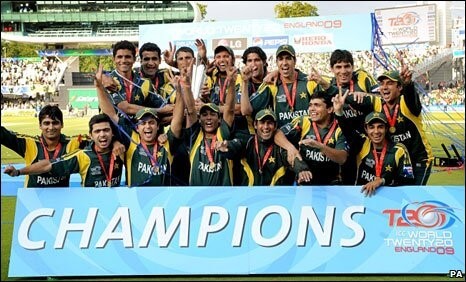 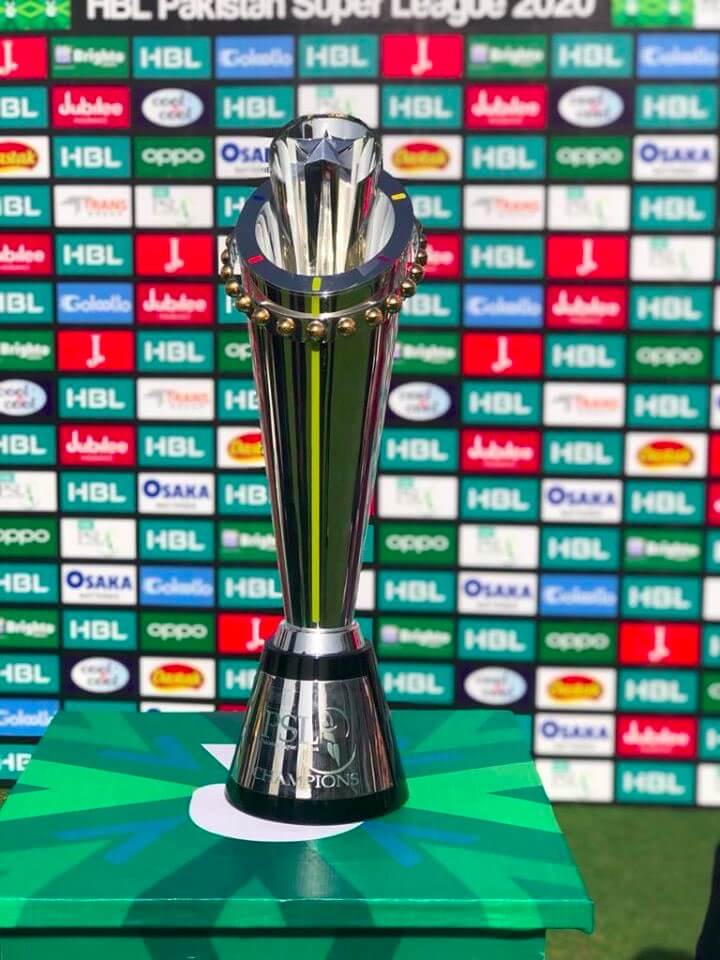 The growth of cricket in Pakistan has been massive since its start in 1952. They have achieved number one rankings across all formats for a brief period of time. In the late 90s and early 2000, they were one of the dominant teams that rocked the cricket world. The love for cricket in the country is so big that their current Prime Minister is their World Cup-winning skipper Imran Khan. However, in recent years, the development of cricket in Pakistan has been halted with a lack of infrastructure, internal politics, fixing scandals, and lack of safety. Nevertheless, the fans and the team are hoping to bring back the glory days as soon as possible.