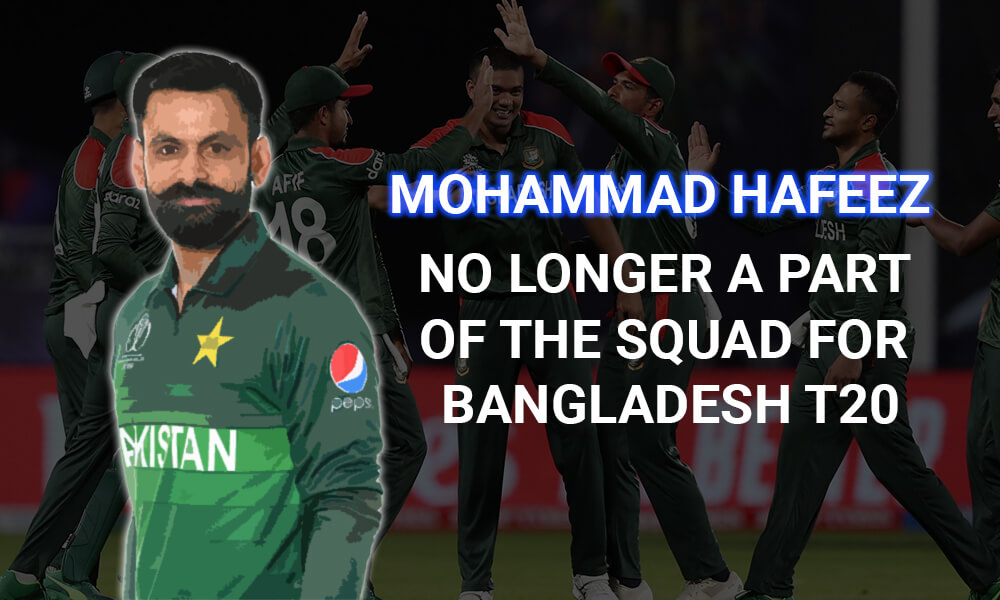 Veteran all-rounder from Team Pakistan Mohammad Hafeez has opted out of the three-match T20 cricket series against Bangladesh on November 8, saying that the chance to be on the prestigious tour should go to a youngster. Hafeez has been playing a crucial role in the ongoing T20 campaign of Pakistan as a part of which they will play against Australia in the semifinal in Dubai to take place on Thursday.

The Pakistani squad will reach Bangladesh directly from the United Arab Emirates where they are scheduled to play two back-to-back Tests after the T20 Cricket World Cup. The selectors have announced that Iftikhar Ahmed will take the place of Hafeez for the matches. Ahmed is also an off-spinner and all-rounder who will bring his outstanding skills to the team.

So far, Ahmed has been a part of the Pakistani cricket squad for thirteen T20I matches, even though he wasn’t chosen for the World Cup. You can watch the three T20I matches live from Dhaka on 19 – 22th November. The following Tests will take place in Chattogram on 26 – 30th November and in Dhaka on 4 – 8th December. The Pakistan Cricket Board has not announced the squad for the upcoming Tests yet.

Usman Qadir (leg-spinner) and Shahnawaz Dahani (fast bowler), who were reserves at the T20I World Cup, are now a part of the Pakistan squad for the Bangladesh series. However, the team has remained with the same management, with the exception of Matthew Hayden who is not available because of his prior commitments.

The Pakistan Squad for Bangladesh T20Is

Read more about the latest cricket news at cric-life.com.