T20 World Cup Final: If I Was a New Zealand Supporter, I Would Have Demanded a Refund, Says Gautam Gambhir 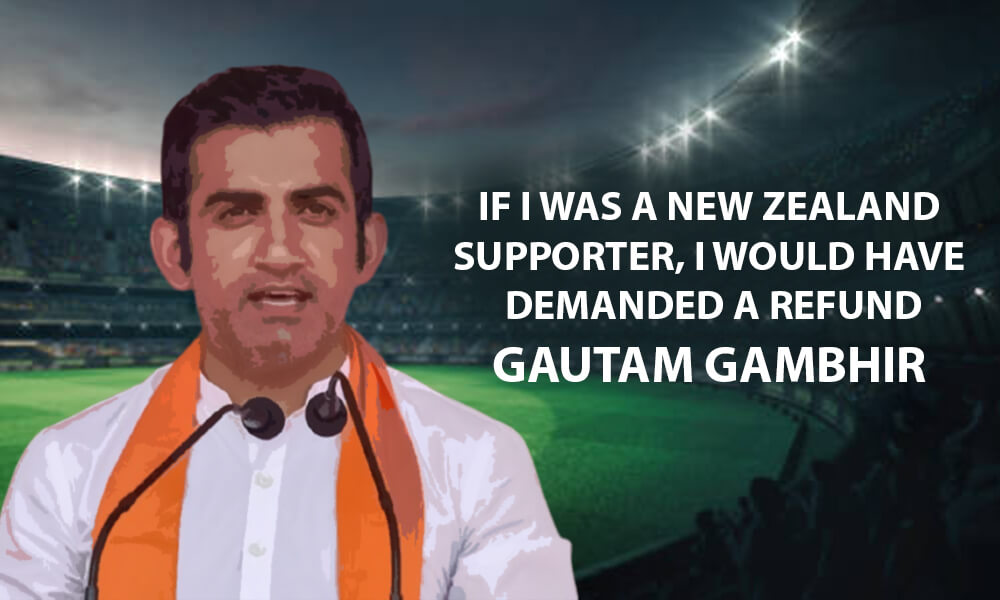 Gautam Gambhir’s choice of winner for the T20 Cricket World Cup 2021 was New Zealand, but the Kiwis left him (and all their fans) heavily disappointed with their show in the second half of the final match. It led Australia to finally take home their first world title in the shortest cricket format.

By putting up a whopping 172/4 on that board, the Black Caps surely started on a strong note. However, things went completely downhill from there on for Kane Williamson’s team. The smashing half-centuries by Mitchell Marsh and David Warner sealed the deal for the Aussies who won the match by eight wickets.

Here’s what Gautam Gambhir and cric-life.com have to say about New Zealand’s performance in the recently concluded T20 World Cup.

New Zealand and Their Dismal Show at the Finals

Gambhir said that his favourite side for the T20 World Cup, right after India, was New Zealand. So, seeing them get bullied around like just another apprentice was not a happy experience for the former opener for Team India.

They started the game on a rather high note by scoring 172 for four. Usually, a total like this is easy to defend in T20, when the attack is as balanced as the one expected from the Kiwis. However, they certainly could not rise up to the occasion as they did not look like the same team that hammered out England or India to reach the finals.

New Zealand happens to be the kind of team that is proud of its meticulous planning, precise execution, clear roles, and brilliant performances. Gambhir went so far as to say that had he been a fan of the Kiwis, he “would have demanded a refund” after watching the team play so abysmally in the second half. According to him, it was not even a performance expected to see in the finals.

The Aussies reached their target of 173 with seven balls left to play, with outstanding all-rounder Marsh being not out at 77 runs off 50 balls. He received ample support from Player of the Tournament Warner who scored 53 runs off 38 balls.

Gambhir said that when watching Australia smash it out of the park with New Zealand on Sunday, he had been reminded of something that his grandpa had told about great institutions. He said that culture was produced by great institutions, while good institutions created individuals. In that particular case, the Australians showed that their cricket culture is in your face, contextual, robust, and simply brilliant.

The audience was especially disappointed at the bowling attack displayed by New Zealand. The bowlers were failing time and again in their line and length when bowling to Marsh. In one blazing knock, he smashed four 6s and six 4s in the match. It is truly difficult to fathom the reason why the Kiwis were bowling short and using the wrong line for Marsh. Being a Western Australian player, Marsh has spent most of his career at the Western Australian Cricket Association Ground in Perth. It means playing the pull shot is one of the first things he has learnt, according to Gambhir – a crucial member of the team that won the inaugural T20 trophy in 2007.

Dealing With the Dew and Changing the Ball

There was a lot of talk regarding the toss and the dew during the World Cup as many predicted that winning the toss could practically lead to winning the match. The late-evening dew certainly did not make it easy for the bowlers, and skippers invariably wanted to bowl first when they won the toss.

Gambhir mentioned that there were a couple of lessons to be learnt from the choices made by the captain. Of course, dew was a major worry, so the management needed to go straight for an early start. Starting an hour early would not have made such a big difference to the fans, broadcasters, and players – none of them would complain. The management should have also made it mandatory to change the ball after ten overs in case of both the innings. These simple changes could have easily restored the balance in this contest.

Gambhir concluded by mentioning that the ICC needed to note all the performances delivered by other teams. It is definitely an area of concern that the new teams failed to do anything notable in the tournament. The new teams did not even seem like a part of the tournament at all. The idea of amateurs playing a professional sport is certainly romantic, but their impact on the field should be stronger for it. Thus, it deserves the attention of the ICC. Of course, it is about the culture that an institution breeds. In this case, the ICC needs to show that culture for the new teams.