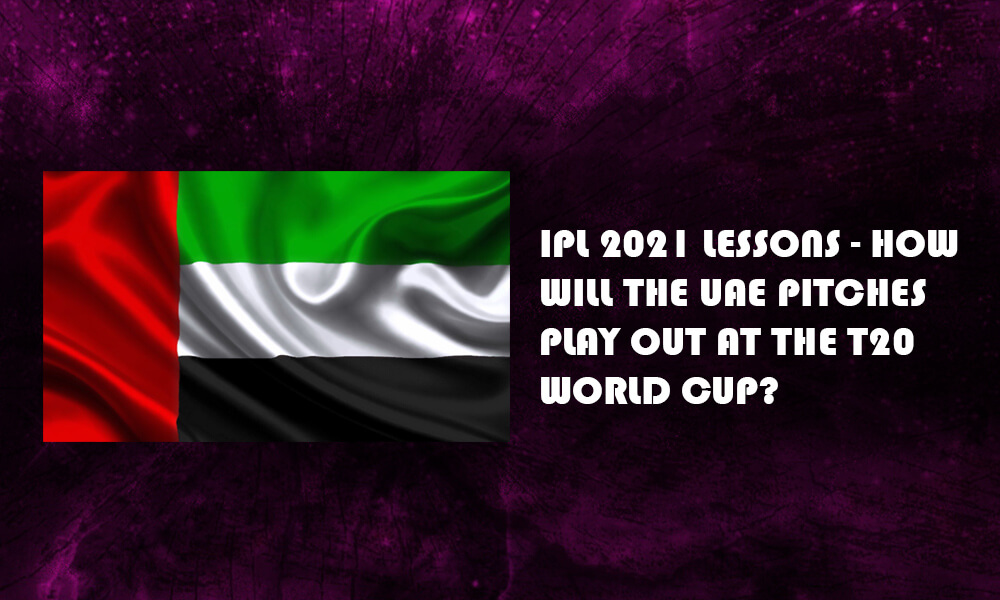 After the exciting IPL 2021 season, we are moving forward to the T20I Men’s World Cup. There is one thing common between both tournaments. It is the pitches where the matches will be held. The participating teams will be headed to the UAE for the world cup matches. The tournament will be played in three different pitches of the UAE, including Sharjah, Abu Dhabi, and Dubai. Here is what the teams can expect from each pitch.

There have not been any changes in the last couple of years in the pitches of Dubai. Some pitches have been slow, whereas there are some that have helped pacers. The average score has been between 150 to 160 over the last two IPL seasons. The pitch seems to be more in favour of seamers. They can concede 27 runs on a wicket as opposed to spinners who can concede at 32 per wicket. Teams will be set forward with at least three fast bowlers to perform in the Dubai pitch. One of the bowlers needs to boast extreme pace.

Another key aspect of the Dubai pitches is their location. The pitches here have square edges with short boundaries on one side. The shape of the pitch makes it challenging for bowlers and batters alike. Generally, the strategies in these pitches centre around including a left-right pair at the field to target a particular boundary. The bowling teams need to figure out from which end the spinners should bowl.

India will be playing four matches in Dubai, and their players can benefit as they are familiar with the pitch due to the IPL. Additionally, the team can leverage multiple options depending on the pitch conditions.

The field in Sharjah was relaid before the UAE phase of the IPL 2021. The pitch was no longer a paradise for batters that it had once been. In the IPL 2020 edition, teams scored a six in every 12 balls. However, in 2021, the number reached 23. In the entire season of the IPL 2021, only 98 sixes were bagged. On slower pitches, the bowlers who showed versatility in their pace experienced more success, whereas spinners and seamers played with an economy rate between 6.79 and 6.29 respectively. However, the pace bowlers witnessed a more reliable strike rate, hitting a wicket in every 17 balls as opposed to spinners (22).

England, South Africa, Pakistan and New Zealand will play two games in Sharjah, each as a part of South 12. If the pitches behaved the same way they did in the IPL 2021, the South Africa and Pakistan squads would have the most benefits. Both teams can put forward three spinners along with the batting lineups. Even if there are no power hitters, the teams could easily score between 140 and 160.

Among all the venues of the UAE, Abu Dhabi is likely to witness high scores in the World Cup 2021. The pitch conditions are great for batsmen. However, due to the bigger sizes of the boundaries, the Abu Dhabi fields favour bowlers as well. There is not much scope for spinners as they average around 33 runs per wicket, whereas the average of pace bowlers remains at 29 per wicket.

The evening dew implies that the game in the afternoon will be significantly different from the matches in the evenings. In many cases, the dew has assisted teams in chasing down high totals. West Indies and Australia will play two games here, whereas Afghanistan will play three, out of which two are in the afternoon. On the whole, there is not any big advantage for teams playing on the Abu Dhabi pitch.

The T20I World Cup will be held in the UAE in October and November. This is the time when the weather in the region begins to cool. The IPL 2020, which was played from September to November, has presented an interesting display of two halves.

In the first half, when the weather is hotter, and dew is less, the teams choosing to bat won around 77% of the matches.

In the second half, which is more relevant to this year’s World Cup, the numbers changed with the chasing teams to win 77% of the matches. The numbers were more apparent in Sharjah and Abu Dhabi pitches. The chasing teams won 15 out of the 18 matches at these venues.

The ICC Men’s T20I World Cup has commenced, and teams have already reached the UAE. The teams can learn a lot about the pitches in the UAE by analysing the IPL 2021 and IPL 2020. Those players who were already a part of the IPL will have the edge over the ones that did not participate in the tournament.