History of Cricket in West Indies 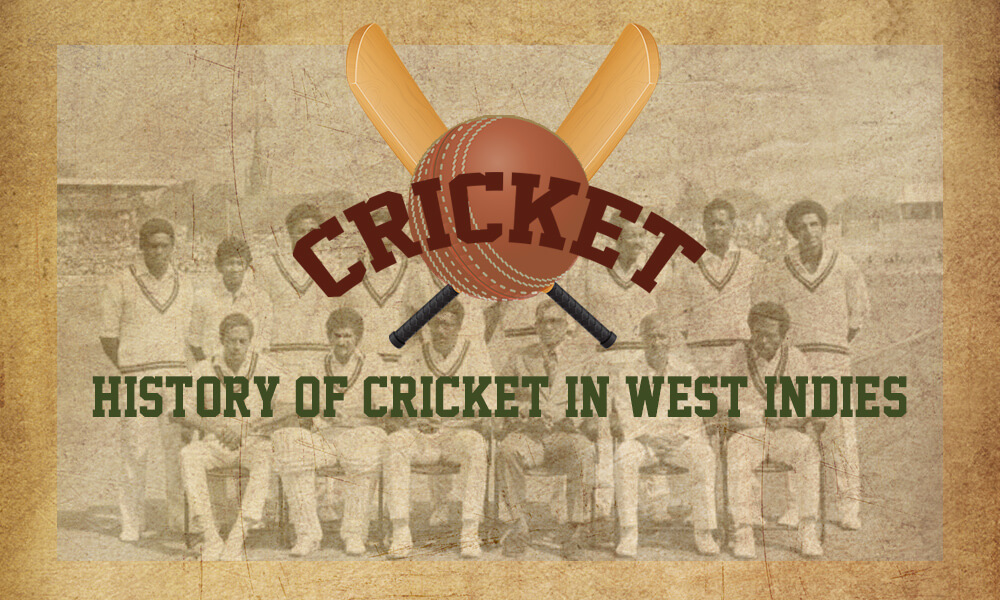 The West Indies are now looked upon as entertainers of the game as the West Indies cricket team is one of the strongest sides in T20 cricket but there was a time when they were looked at with a feeling which used to send shivers down the spines of their opponents. Their fast-bowling attack of the late 70s and the early 80s is still considered the best and scariest bowling attack of all time. Though their stature might not be the same now, they will always be remembered for being the first-ever side to dominate international cricket. They also have the joint second-most number of World Cups and ICC trophies (with Australia being the first and India being the joint-second) in men’s cricket which makes them one of the heavyweights in terms of achievements in the arena of international cricket. The first time a combined West Indies side played was way back in the 1880s when they toured Canada and the United States. In the 1890s, the first-ever West Indies representative side was selected to play against the visiting English sides. Though none of these games were official Test matches, they were very important for the development of cricket in the Caribbean back then.

The West Indies became just the 4th side (after England, Australia, South Africa) to feature in a Test match when they played their first-ever official Test match in 1928 against the English side at the Lord’s held on 23-26 June with the English side defeating the Caribbean troops comprehensively by an innings and 58 runs. Robert Karl Nunes, a player of Portuguese origin who used to keep wickets, was the skipper of the West Indies in their inaugural Test. 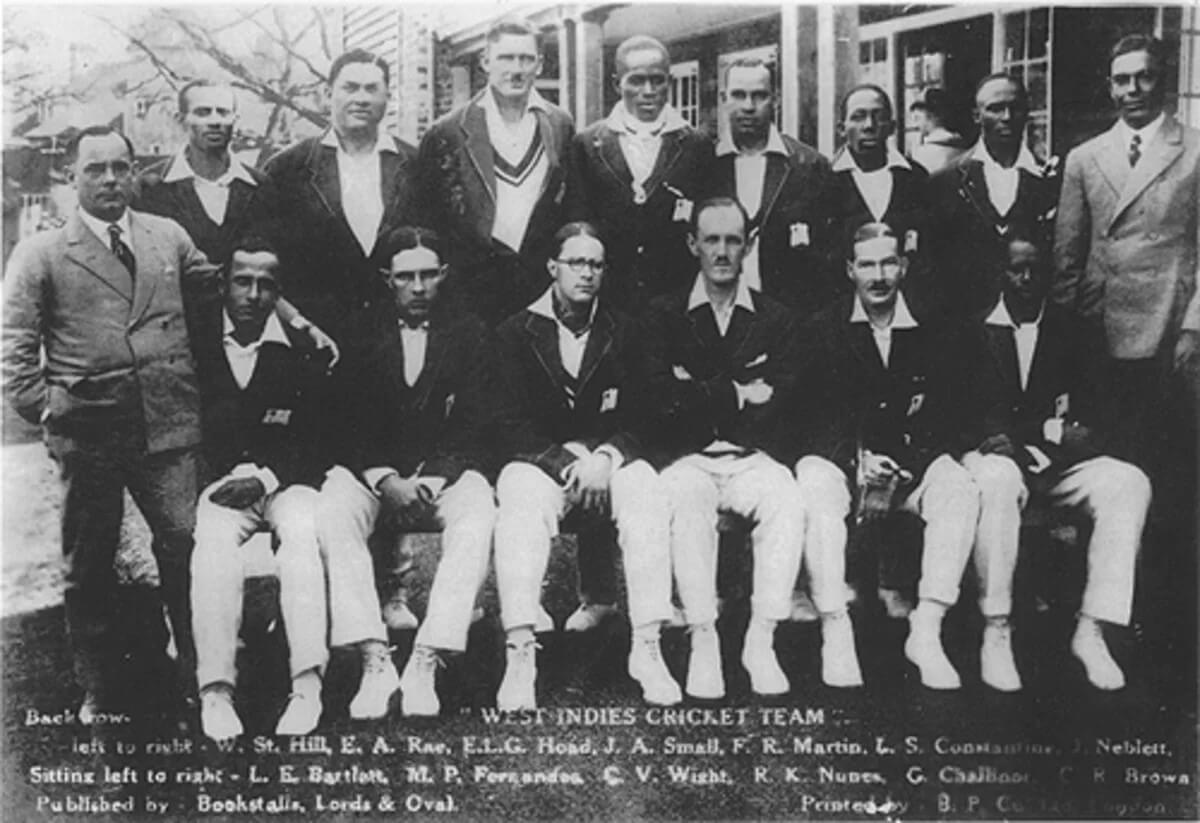 Less than 2 years later, the West Indies registered their first-ever Test win in Georgetown in the 2nd Test series, which was only the 6th Test match of their nation’s cricketing history, when England toured the Caribbean at the start of the year 1930. The West Indies won the 3rd Test of the series by a whopping 289 runs and ended up leveling the 4-match series by 1-1. The West Indies’ first-ever series win came in the 5th ever Test series that they played when they defeated a touring English side by 2-1 in a 4-match series at the start of 1935. In the 1920s and 30s, the one name that stood out was that of Learie Nicholas Constantine. He was a seaming all-rounder and is often referred to as the first to cap off the rich cricketing legacy of the Caribbean.

After their first-ever Test series win, the West Indies defeated England in 1948 once again at home. The West Indies’ first-ever away series win came against India in 1949 when they registered a series victory by 1-0 in a 5-match affair. The West Indies registered the most monumental series win of their early years when they defeated England in England by 3-1 in a 4-match series in the year 1950. The West Indies started to grow in stature in the decade of 1960s. They won all their Test series in 1962-67, defeating India (twice), England (twice), Australia (once), and announced themselves as a top-notch side to watch out for in the Test cricket arena.

The West Indies kept flourishing in Test cricket and by the end of the 1970s, they were unarguably the best Test-playing nation by a fair margin. This can be determined by the fact that the West Indies went undefeated in a total of 29 Test series that they played from April 1980 to March 1995. In these 15 years, West Indies won 20 Test series while 9 of them were drawn. The 1980s also saw the West Indies set a then-record streak of 11 consecutive Test victories, which is a part of a still-standing record of 27 Tests without defeat (with the remaining 16 being draws). They also inflicted a 5-0 blackwash on their back-then arch-rivals England twice, with one of them coming in England in 1984 and the other in the West Indies in 1986.

The might of the West Indies started to decrease slowly and gradually post 1995, despite having some great players like Brian Lara and Shivnarine Chanderpaul, as the quality of their overall squad started declining and by the start of the 21st century, they had become easy prey for any nation playing against them barring the likes of new Test-playing nations Bangladesh and Zimbabwe. In 2000-01, they were swept 5-0 by the Aussies on their soil. Since then, the West Indies have played a total of 70 Test series and have lost 45 of those. 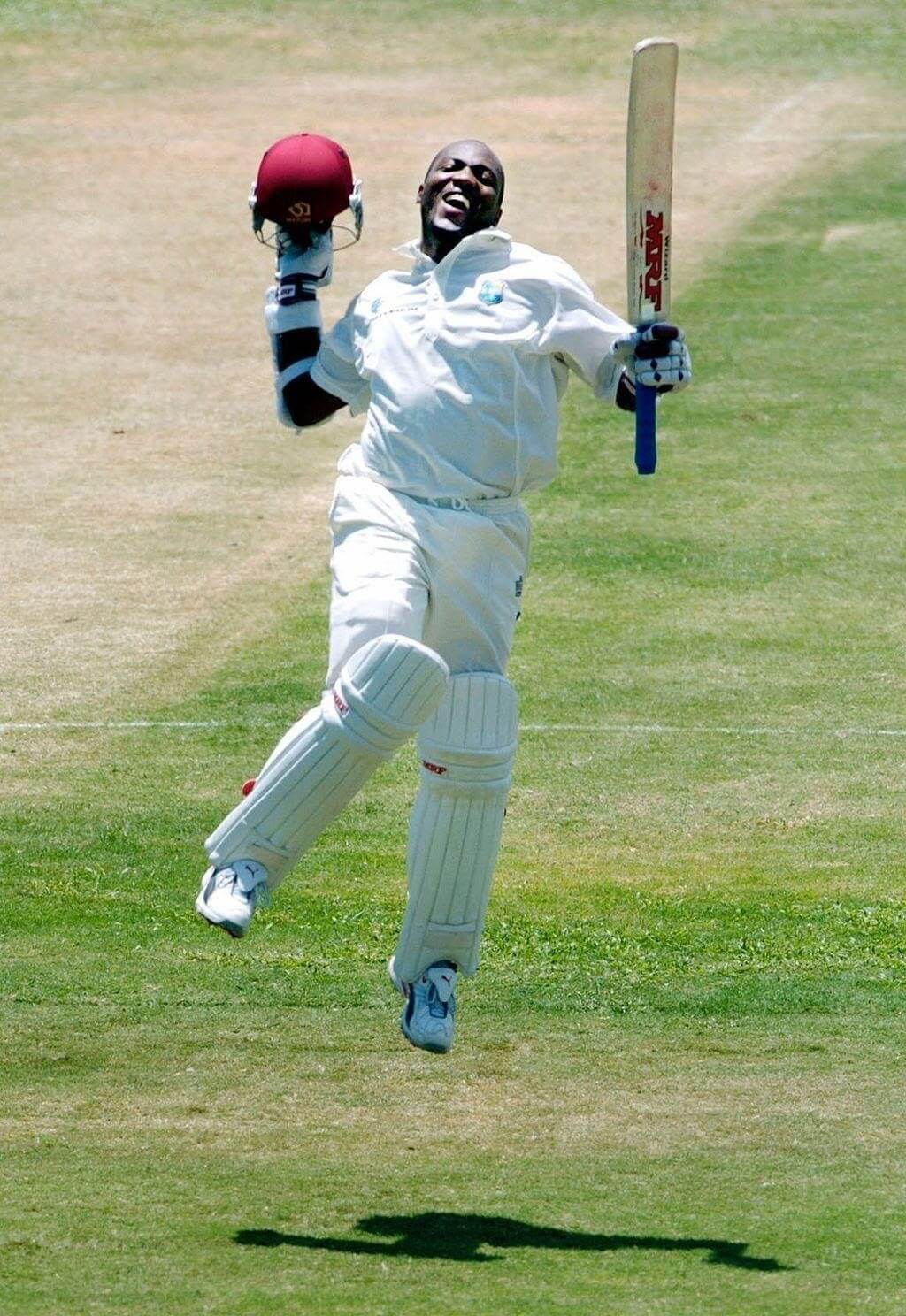 With the rising demand of Caribbean stars in various T20 leagues across the globe, the popularity of Test cricket in the West Indies is fading even more as the younger generation is also trying to imitate their role models in Chris Gayle, Kieron Pollard, Andre Russell, Dwayne Bravo, etc. who have a massive amount of fame and money without focusing on the longest format of the game. This is the reason why the West Indies’ Test cricket future has very little or no scope of rising the ranks of cricket once again. The West Indies have featured in a total of 556 Tests, have won 177 games and lost on 201 occasions. One of the games ended up being a rare tie while 177 have been drawn.

The West Indies played their first-ever ODI series (55-over matches) in September 1973 against England in England. It was a 2-match series with the West Indies losing the first ODI by a wicket in the last over on the 5th of September in Leeds. However, they levelled the series by registering their maiden ODI win with 8 wickets to spare on the 7th of September at the Oval. Rohan Kanhai was the skipper of the Caribbean side for that series.

Their next assignment was under Clive Lloyd in England in the form of the prestigious Prudential Cup (modern-day Cricket World Cup) in 1975. An ODI innings comprised 60 overs back then. West Indies won the Prudential Cup by beating Australia in the final by 17 runs at Lord’s on the 21st of June. 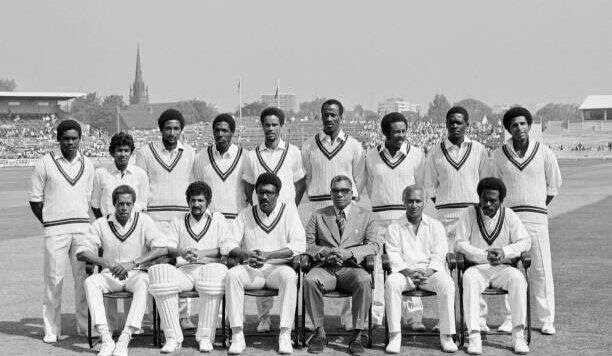 The West Indies played a bare handful of series in between the course of the two Prudential Cups but turned up victorious again in the 1979 edition of this prestigious tournament. They beat England by 92 runs on the 23rd of June, yet again at Lord’s, to claim their second major title. 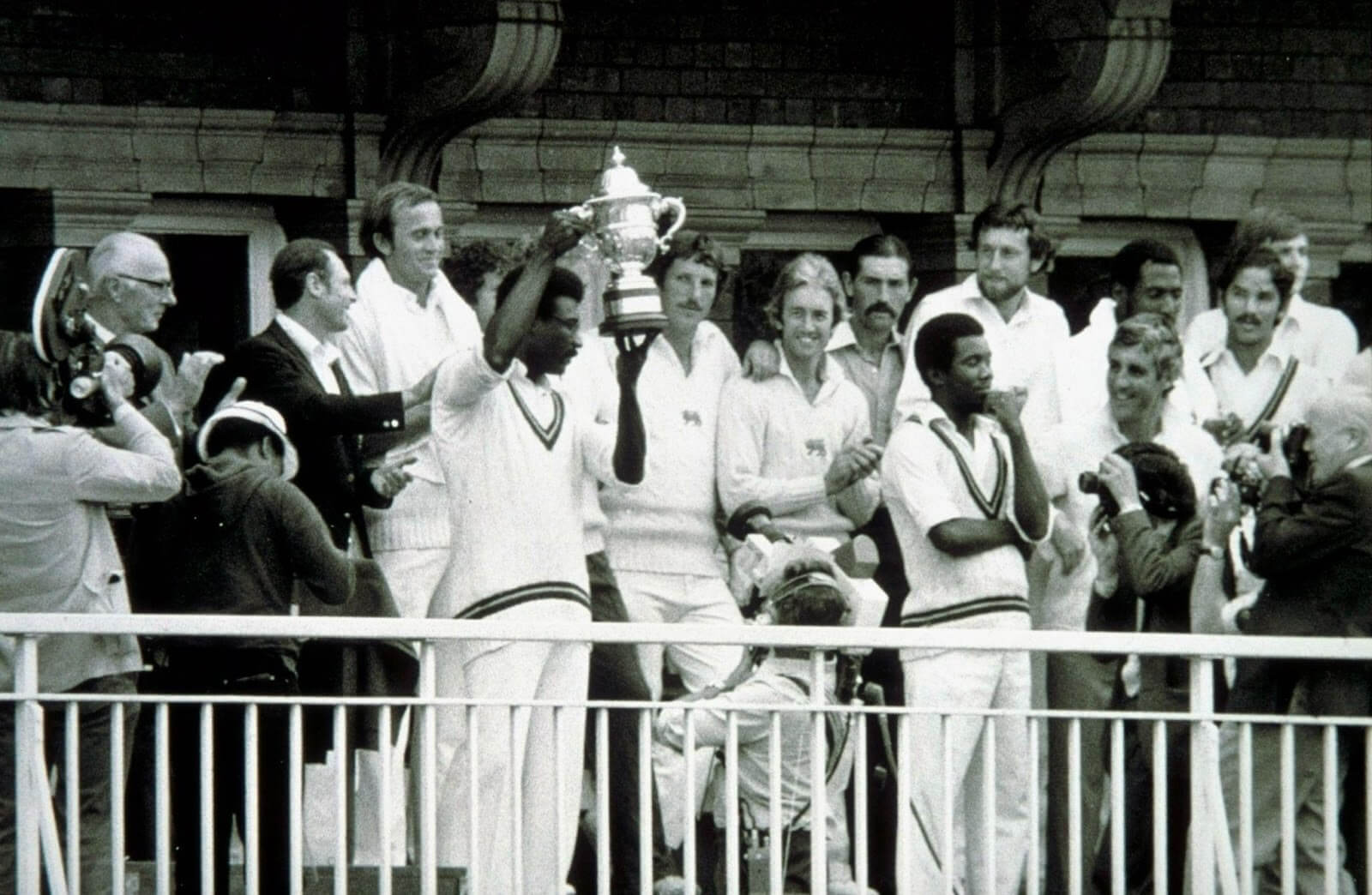 The West Indies claimed the Benson & Hedges World Series Cup in 1980 and 1982 and were again looking the favourites going into the 1983 Prudential Cup. They were well on the course of registering a hat trick of being the ‘World Champions’ when an underdog Indian side surprised them as well as everyone else in the cricketing fraternity by beating the West Indies by 43 runs in the final at Lord’s on the 25th of June 1983. Despite this major setback, the West Indies continued their dominance in ODIs by winning the Benson & Hedges World Series Cup twice, in 1984 and 1985.

The following years resulted in the West Indies’ decline in ODI cricket. This team is yet to feature in a world cup final post-1983. The West Indies raised the hopes of their fans by reaching the final of the inaugural ICC Knockout Cup (modern-day Champions Trophy) but a defeat against South Africa shattered the hopes of the ICC trophy. The West Indies rose to glory once again when they won the ICC Champions Trophy 2004 at the Oval by beating hosts England by 2 wickets in an extraordinary fashion. The 2006 Champions Trophy saw them playing the final of a major ICC event for the last time and they were defeated comprehensively by 8 wickets at the hands of Australia at the Brabourne Stadium in Mumbai. 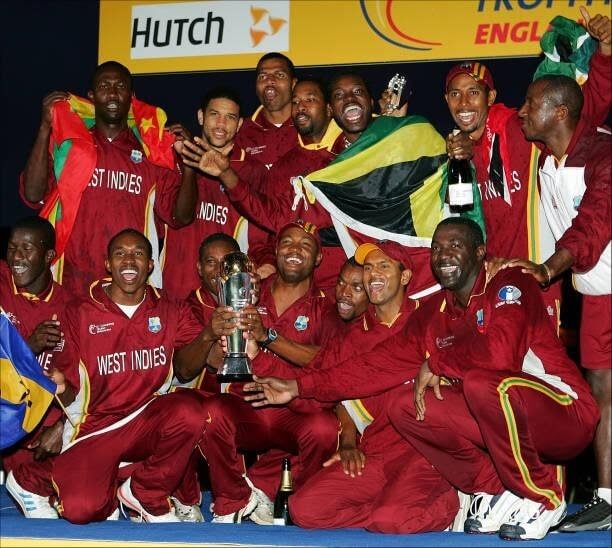 The West Indies’ triumph in the Champions Trophy 2004 (source)

Since then, the West Indies have been team that perform well occasionally in patches but lack consistency and for them to improve, they need more players who can anchor the innings and focus on strike rotation rather than trying to tonk every ball for a boundary. The West Indies have played a total of 831 ODIs and have won in 405 of them while 386 have resulted in a defeat. They have also featured in 10 tied games while 30 games had no result.

The Caribbean players have a larger demand across all domestic T20 leagues of different countries. Their attacking batting skills, energetic fielding efforts and new styles of celebrations are the reasons behind their fame. The West Indies played their first T20I game against New Zealand in 2006. Their first match went tied and New Zealand managed to win in the bowl-out stage. In the inaugural edition of the ICC T20 World Cup, Chris Gayle stunned everyone in the first match by scoring a brilliant T20 hundred (117 runs from 57 balls) to become the first player in the history of this format to reach this feat. Though the Windies lost that match, Gayle put his name in the history books. 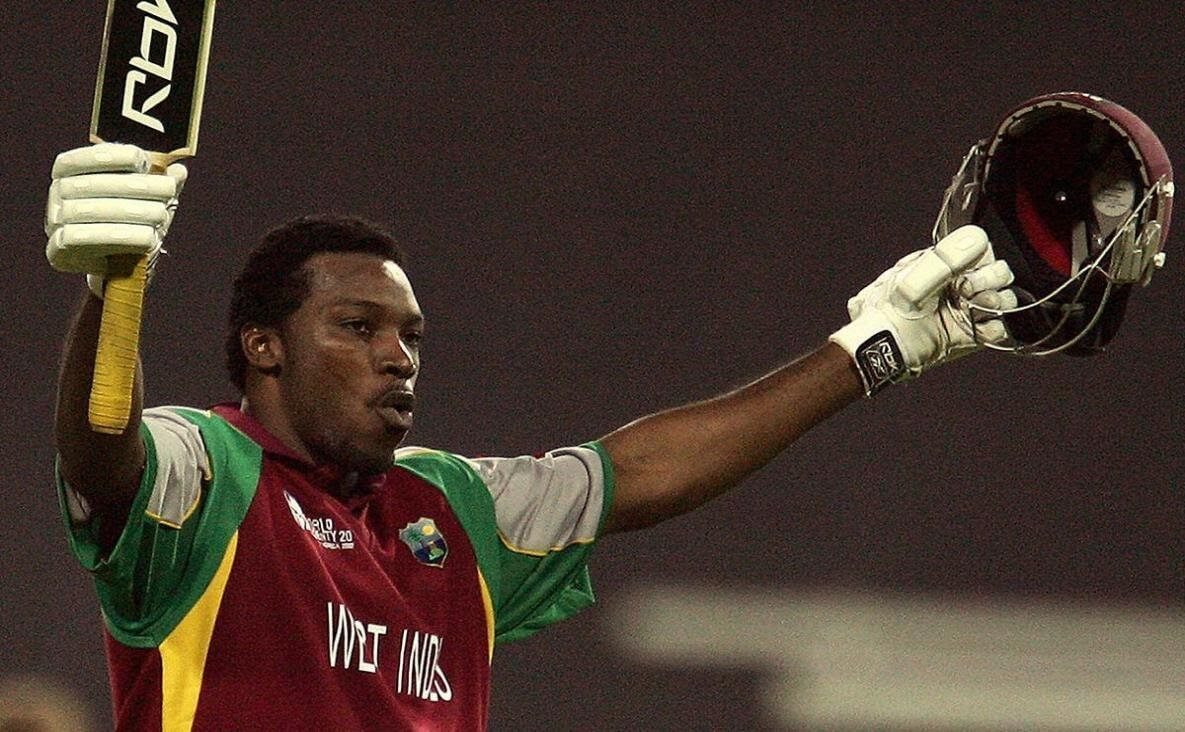 The first player to score a hundred in T20 format (source)

The West Indies’ team became champions of the ICC T20 World Cup for the first time in 2012 under the captaincy of Darran Sammy. Sunil Narine and Marlon Samuels were the team’s heroes during that World Cup. 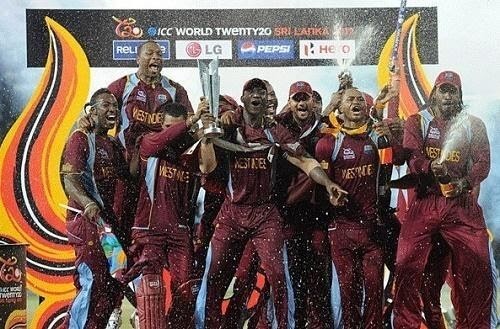 The West Indies did a brilliant job again in 2016 to lift the trophy for the second time as Darran Sammy became the second captain after Viv Richards to lift multiple ICC trophies. In the final against England at Eden Garden, Carlos Braithwaite hit 4 consecutive sixes off Ben Stokes in the last over while chasing 19 runs to sink England in the final. 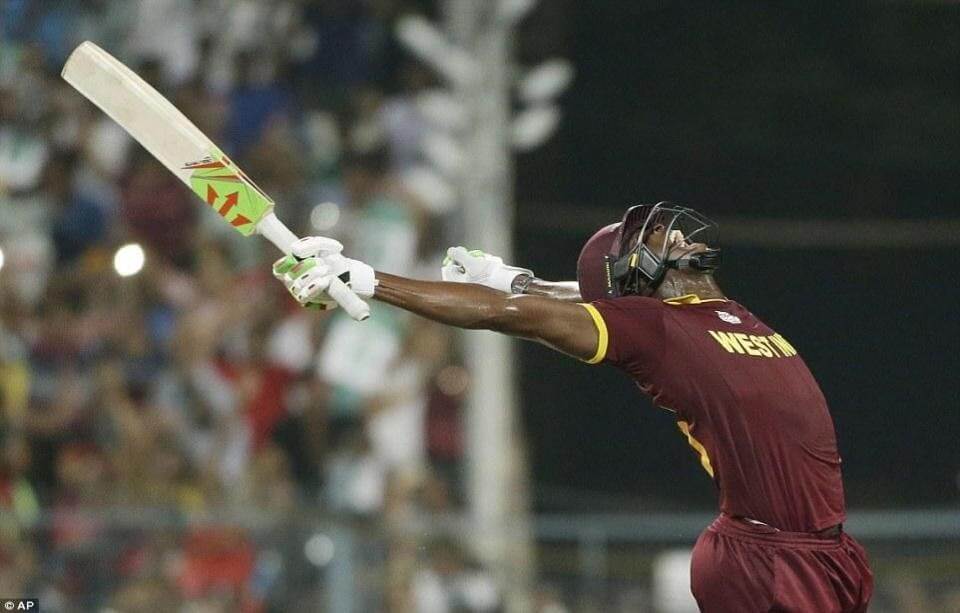 This two-time World T20 champion side have played 144 T20Is matches so far and have ended up winning on 64 occasions alongside 71 losses. They have also featured in 9 games having no result. While doing so, few players made history with Chris Gayle and Dwayne Bravo at the top of that list.