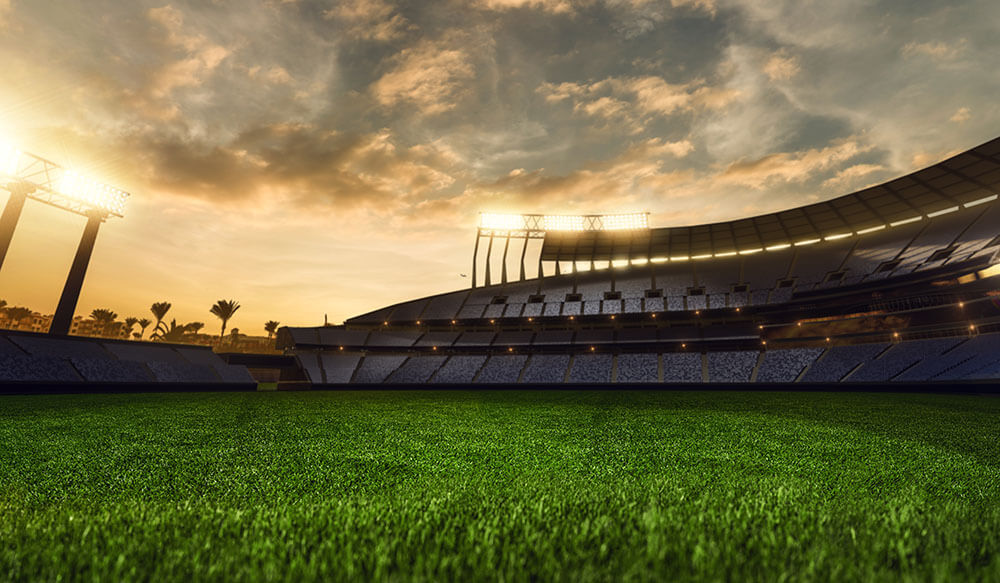 India has a rich history of cricket. It is the most popular sport of the nation with 1.35 billion people. Everyone wants to see a live cricket match at least once in their life. To accommodate such a cricket-loving crowd, BCCI have built and upgraded cricket stadiums over the last few decades.

Here is the list of largest cricket grounds in India with seating capacity mentioned in brackets:

Let us look at each of the grounds in detail.

Sardar Vallabhbhai Patel, commonly known as the Motera Stadium, is the largest cricket stadium in the world with a seating capacity of 110,000. The stadium is owned by Gujarat Cricket Association (GCA). Motera is located on over 63 acres. Inaugurated in 1983 with a Test match between India and the West Indies, Motera has gone through a series of renovations to increase the capacity of spectators from 49,000 to 110,000. The stadium was rebuilt by February 2020 with an estimated cost of INR 8 Billion (USD 110 million). It is the home ground for Gujarat Cricket Team. The pitch is slow and hardly assists bowlers as well as batsmen.

Motera has hosted 36 international matches since its inauguration in 1983. India have registered 4 victories in 12 Tests played there and have won only 7 out of the 15 ODIs. It has hosted a single T20I between India and Pakistan, won by India.

Bagira Thakur is the current pitch curator for Motera Stadium.

Cricket Association of Bengal’s (CAB) Eden Gardens is the second-largest cricket stadium in India with a seating capacity of 80,000. Known as Mecca of Indian Cricket, Eden Gardens is famous for hosting ICC ODI and T20I World Cup finals. Established in 1864, Eden Gardens hosted its first recorded Test in 1934 between India and England. The pitch helps swing bowlers in the beginning and makes it easier for batsmen with the course of time.

In 41 Tests played here so far, India has won 12 and has lost 9. Eden Gardens is famous for the Test between India and Australia in which India became only the third team to win the game after being forced to follow on. Eden Gardens has hosted 30 ODIs and 7 T20 games. Eden Gardens is home to Kolkata Knight Riders (KKR) in the IPL.

Sujan Mukherjee is the current pitch curator for Motera Stadium.

Commonly known as Naya Raipur International Cricket Stadium, it is owned by Chattisgarh State Cricket Sangh (CSCS). It is India’s third-largest cricket stadium with a seating capacity of 65,000. Inaugurated in 2008, it hosted its first international game between Canada National Cricket Team and Chattisgarh Cricket Team. It occasionally hosts Delhi Daredevils (DD) in the IPL.  8 games of the T20 Champions League were played at Nava Raipur Stadium. It is yet to host a Test or an ODI.

Kerala Cricket Association (KCA)-owned Jawaharlal Nehru Stadium can accommodate 60,500 spectators. Originally known as Kaloor Stadium was built to host football games. It eventually started hosting cricket matches in 1998. Since its inauguration ODI between India and Australia, 9 ODIs have been played here with India winning 6 out of them. The pitch is known for Batsmans Paradise. Indian Legend Sachin Tendulkar has an odd record of becoming the leading wicket-taker at this ground. He has taken 10 wickets on this ground with 2 five-fers. KCA has plans to obtain Test Status for this stadium in the future. It hosted Kochi Tuskers Kerala in the IPL.

Hyderabad Stadium is the home ground of the Hyderabad Cricket Association (HCA). It has a seating capacity of 55,000. Built on over 18 acres, it was inaugurated by an ODI between India and South Africa which was won by the visitors. It took 6 years for India to win their 1st ODI at this ground. Hyderabad Stadium hosted New Zealand in its first Test match in 2010. India has won 4 out of the 5 Tests played at this venue. It also has 1 T20I in its records between India and the West Indies that hosts won, chasing 208 runs by 6 wickets. The flat track pitch is batsman-friendly. Currently, it is also a home ground of the Sunrisers Hyderabad (SRH) franchise in the Indian Premier League (IPL).

Greenfield International Stadium, also known as The Sports Hub, is jointly operated by Kariavottam Sports Facilities Limited (KSFL) and Kerala Cricket Association (KCA) to host cricket and football matches. It has a seating capacity of 55,000. It is also India’s first eco-friendly stadium. Built on a DBOT (Design, Built, Operate & Transfer) basis, Greenfield Stadium started providing its services to international cricket in 2017. The pitch is bowler-friendly.

It has hosted 3 international games including an ODI and 2 T20I games. India won the 1st rain-affected T20I at Greenfield against New Zealand and lost the second one to the West Indies. The only ODI between India and West Indies in 2018 was won by India.

Biju is the current pitch curator for Greenfield International Stadium.

Commonly known as Chepauk, M.A. Chidambaram Stadium is India’s second oldest cricket stadium with a seating capacity of 50,000. Since its inauguration international match, Chepauk has hosted 32 Tests, 22 ODIs and 2 T20Is. It has also hosted the first-ever Ranji Test match in 1934. Throughout the years, Chepauk has witnessed some mesmerising performances including the Indian Cricket Team’s first Test Victory, the second-ever tied Test match between India and Australia, Virendar Sehwag’s fastest triple century and Narendra Hirwani’s debut record of 16 wickets for 136 runs. India has won 7 out of the 14 ODIs and 14 of the 32 Tests played here. Chidambaram Stadium is the home ground of Chennai Super Kings (CSK) in the IPL.

Parthasarathy is the current pitch curator for M.A. Chidambaram Stadium.

Bharat Ratna Shri Atal Bihari Vajpayee Ekana Cricket Stadium, commonly known as Ekana Cricket Stadium, is owned by Ekana Sportz City and has a seating capacity of 50,000. It was inaugurated by a T20I between India and the West Indies in 2018. It is the only international game played by India at this venue so far. Rohit Sharma became the only player to score four T20I centuries in that match. Ekana Stadium is the third home ground for Afghanistan Cricket Team. Ekana has hosted 1 Test, 3 ODIs and 4 T20I. All matches except one T20I were played between Afghanistan and the West Indies.

Jharkhand States Cricket Association International Cricket Stadium, known as JSCA International Cricket Stadium, is the home ground of the Jharkhand Cricket Team and Chennai Super Kings (CSK). It has a seating capacity of 50,000. It was established by JSCA in 2011 as a result of a dispute with Tata Steel to host international matches in Keenan Stadium. The pitch offers a good turn to spinners. The stadium has 9 pitches and is constructed in a way that no shadow falls on any of them until 4.45 pm. It was inaugurated in 2013 with an ODI between India and England. Out of the 2 Tests, 5 ODIs and 2 T20Is that took place at this venue, India has won 1 Test, 3 ODIs, and both T20Is with 1 ODI having ended up without any result.

Vidarbha Cricket Association Stadium, commonly known as New VCA, is India’s largest Cricket Stadium in terms of playing area. The straight boundaries are 80 yards and the square boundaries are 85 yards from the pitch. It has a seating capacity of 45,000. The inaugural Test was played between India and Australia. 5 out of the 6 Tests played there have shown results with India winning four matches. VCA stadium has hosted 9 ODIs. The team batting second has won 6 out of these 9 games. It holds a record of hosting India’s most number of T20I matches. 12 T20I games have been played here including 9 games of the 2016 ICC World T20. The pitch is bowler-friendly.

Pravin Hinganikar is the current pitch curator for VCA Stadium.