Most ODI Matches Played by a Player 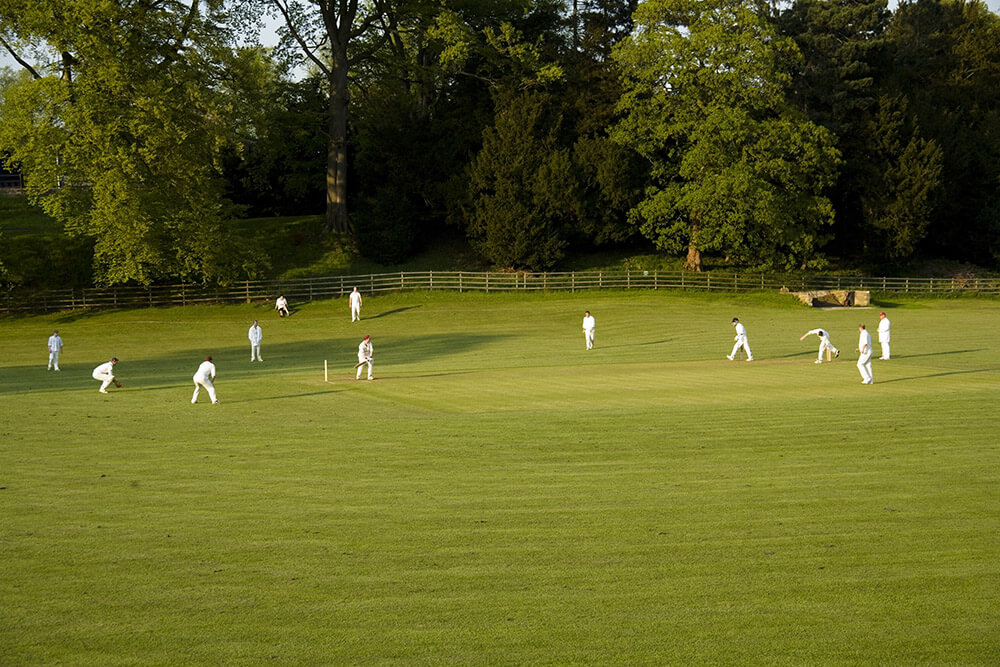 India’s Sachin Tendulkar holds the record for the most ODIs played. In 463 matches he played, he scored 18426 runs at 44.83 and took 154 wickets at 44.48. It all began when India and Pakistan met in the second match of a series at Gujranwala on India’s tour of Pakistan in December 1989. In a match shortened by rain to 16 overs a side, Pakistan batted first and scored 87/9 before restricting India to 80/9 with Sachin failing to score. His last match came in the Asia Cup against the same opposition at Dhaka in March 2012. Batting first, Pakistan scored 329/6. India chased down the target with 6 wickets and 13 balls to spare. Tendulkar contributed 52 off 48 balls with five fours and a six.

Sri Lanka’s Mahela Jayawardene has played 448 matches and scored 12650 runs at 33.37; he has also taken 4 wickets at 70.37. Mahela made his debut at Colombo against Zimbabwe in January 1998. Batting first, Zimbabwe had made 212/8 before the hosts chased it down with 5 wickets and 10 balls to spare. Jayawardene contributed an unbeaten one run. Jayawardene played his last ODI in the quarterfinal of the ICC World Cup in 2015 against South Africa at Sydney on 18 March, a match that South Africa won by 9 wickets, chasing a target of 134. Jayawardene scored 4 off 16 balls.

Sri Lanka’s Sanath Jayasuriya has played 445 ODI matches and scored 13450 runs at 32.36. He has also taken 323 wickets at 36.75. In his first game against Australia on 26 December 1989, the hosts batted first to score 228/5 before bowling out Sri Lanka for 198, with Jayasuriya making 3 runs. Jayasuriya played his last game against England at the Oval on 28 June 2011. In a 32-overs-a-side game, England batted first and made 229/8 before dismissing Sri Lanka for 121, in which Sanath contributed only two runs.

Sri Lanka’s Kumar Sangakkara has played 404 ODIs and scored 14234 runs at 41.98. He has also taken 402 catches and effected 99 stumpings. In Sangakkara’s first ODI held at Galle on 5 July 2000, Pakistan set up a target of 164/8 in 45 overs that the hosts chased down with 5 wickets and 45 balls to spare. Sanga contributed 35 off 55 balls and took a catch to dismiss Mohd Yousuf. Like Jayawardene, Sangakkara played his last ODI against South Africa in the ICC World Cup in 2015. Sangakkara fought almost a lone battle in Sri Lanka’s score of 133, with 45 off 96 balls, a target that South Africa chased down in 18 overs.

Pakistan’s Shahid Afridi played 398 matches and scored 8064 runs at 23.57; he also took 395 wickets at 34.51. In Afridi’s first match against Kenya at Nairobi on 2 October 1996, Pakistan bowled out Kenya for 148 before chasing down the modest target with 4 wickets and 58 balls to spare. Afridi took 0/32 in 10 overs but did not get to bat. His last game was the ICC World Cup quarterfinal played against Australia at Adelaide on 20 March 2015. Pakistan, batting first, were bowled out for 213, a target that Australia chased down with 6 wickets and 97 balls to spare. Afridi scored 23 off 15 balls and took 0/30 in 4 overs.

Australia’s Ricky Ponting has played 375 matches and scored 13704 runs at 42.03. He has also taken 3 wickets at 34.66. Ponting played his first ODI against South Africa at Wellington on 15 February 1995 in the New Zealand Centenary Tournament. After bowling out South Africa for 123, Australia chased down the target in 43.2 overs with 3 wickets in hand. Ponting was out for 1. In his last match against India at Brisbane on 19 February 2012, Ponting scored 7 runs in Australia’s imposing first innings score of 288/5 before they bowled India out for 178 in 43.3 overs.

Pakistan’s Wasim Akram has played 356 matches and taken 502 wickets at 23.52. In his debut match at Faisalabad on 23 November 1984 against the touring New Zealand team, Pakistan batted first and scored 157/5 in a rain-curtailed game of 20 overs a side before restricting the Kiwis to 152/7 to win by 5 runs. Akram took 0/31 in his four overs. Wasim played his last ODI game during the ICC World Cup against Zimbabwe at Bulawayo on 4 March 2003. Pakistan batted first and scored 73/3 in 14 overs with the match being abandoned due to rain.

India’s MS Dhoni has played 350 matches and scored 10773 runs at 50.57 runs. He has also taken 321 catches and effected 123 stumpings. In his first ODI at Chattogram against Bangladesh on 23 December 2004, India batted first and scored 245/8 before restricting Bangladesh to a score of 234/8. Dhoni was run out for zero and himself had a hand in the run out of Bangladesh opener Nafees Iqbal. Dhoni’s last game was the semifinal against New Zealand at Manchester in the ICC World Cup on 9 and 10 July 2019. The Kiwis batted first and scored 239/8. In reply, India were bowled out 221. Dhoni was run out at a crucial stage for 50 off 72 balls. As a keeper, he had a hand in the dismissal of New Zealand batsman Grandhomme, catching him off the bowling of B Kumar.

Sri Lanka’s Muralitharan has played 350 matches and taken 534 runs. In his first ODI against the touring Indians at Colombo on 12 August 1993, Sri Lanka batted first and scored 204/7 before bowling out India for 196. Murali contributed 1/38 to the Indian collapse. He played his last match in the final of the ICC World Cup against India at Mumbai on 2 April 2011. Sri Lanka batted first and scored 274/6. India chased down the target with 6 wickets and 10 balls to spare. Murali took 0/39 in 8 overs.

Most matches played in One Day International cricket as of February 2020, by player 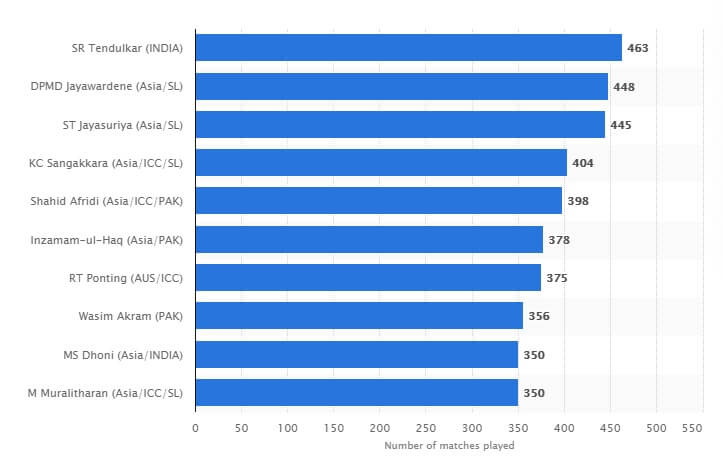