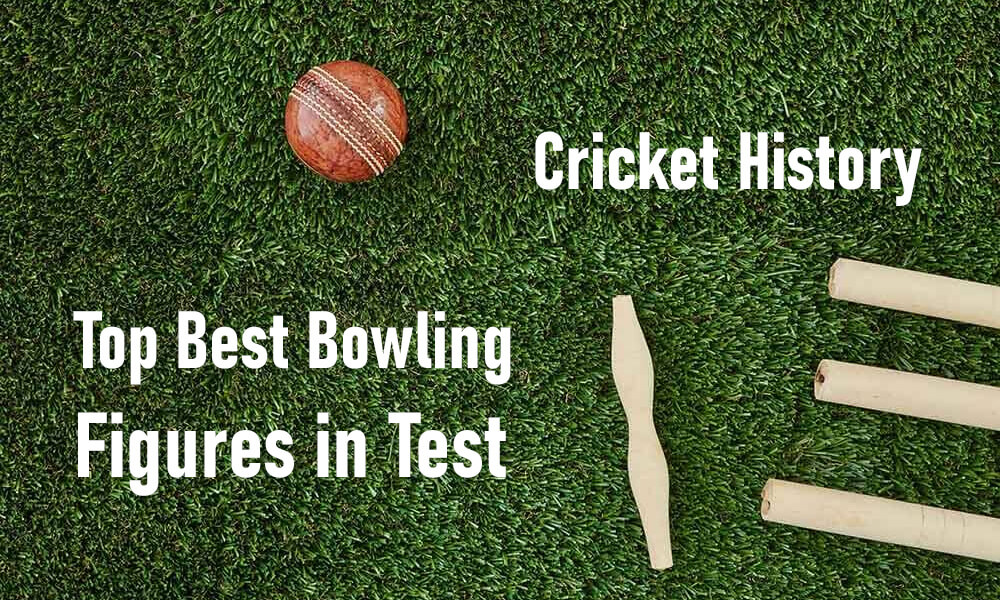 The best part about Test cricket is the fact that it’s an evenly balanced contest between bat and ball. For batsmen playing in the Test format, application of ability and an undeterred concentration is what allows them to excel whereas, for bowlers, it’s all about the relentless pursuit of line and length. Below, we’ve put together a list of the best bowling figures in Test cricket, bowlers who have single-handled turned the tide of the Test match in their teams’ favor.

These bowling spells have been marked by the disciplined and relentless pursuit of good length deliveries that have led to the dismissal of the batsman.

Taking all 10 wickets of the opposition in a single innings by one bowler is almost unheard of. Yet, this seemingly impossible feat did take place for the first time way back in 1956 when English off-spinner Jim Laker went on to take all 10 wickets while Australia was batting. With this, Laker recorded the best bowling figures in Test cricket. In a total of 51.2 overs that he bowled, Laker gave away just 53 runs with 23 maidens in the process and claimed all 10 wickets.

This bowling effort sits at the top of the best bowling figures in Test cricket and will be hard to emulate even in the times to come.

One of the greatest leg-spin bowlers to have ever played the game, Indian spinner Anil Kumble was known for his wicket-taking ability especially on pitches that had something to offer for the spinners. Against arch-rivals Pakistan, Anil Kumble went on to take all 10 wickets in one inning and at the time became only the second bowler in Test history to take all 10 wickets in a single inning.

Having bowled 26.3 overs with 9 maidens, Kumble gave away just 74 runs and single-handedly dismissed the Pakistani batsman.

Playing for the first time at the Wankhede stadium, Ajaz Patel of New Zealand who has Indian roots went on to bowl one of the best spells in Test match cricket as he dismissed all 10 Indian batsmen in one inning, becoming just the third bowler in the history of Test cricket to have achieved the feat. Ajaz bowled a total of 47.5 overs in which he gave away just 119 runs and bowled 12 maidens in the process of dismissing all 10 Indian batsmen.

English bowler George Lohmann produced a bowling spell of a lifetime as he took 9 wickets and helped in dismissing the South African innings for a low score. During his bowling spell, Lohmann bowled a total of 14.2 overs in which he gave away just 28 runs with 6 maidens and claimed 9 wickets at a miserly economy of just 2.33.

Yes, that’s right. Jim Laker features twice on the list of best bowling figures in Test cricket. The English off-spinner left Australia in a daze as he claimed 9 Australian wickets in a single inning and gave away just 37 runs. Laker bowled a total of 16.4 overs with 4 maidens during his spell which claimed the 9 wickets.

One of the most proficient bowlers to have played the game is Sri Lankan off-spin bowler Muttiah Muralitharan and it’s only natural that his name features in the list of best bowling figures in Test cricket.

He also holds the world record for claiming most wickets in both the Test format and ODI cricket and his bowling spelling against Zimbabwe in 2002 is one of his finest.

In a spell during which Muralitharan bowled 40 overs and gave just 51 runs, he went on to claim 9 wickets and recorded one of the best bowling figures in Test cricket.

Arguably one of the best all-rounders to have ever played the game of cricket, Richard Hadlee of New Zealand etched his name into the history books as he went on to claim 9 wickets in a single innings against Australia. In the 23.4 overs that Hadlee bowled, he gave just away 52 runs and claimed 9 wickets.

Featuring 7th on the list of the best bowling figures in Test cricket, Pakistan’s spin bowler Abdul Qadir left England in a daze as he spun his bowling web around the English batsmen. Having bowled 37 overs with 13 maiden overs, Qadir gave away just 56 runs at a miserly economy rate of just 1.51.

English pacer Devon Malcolm features ninth on the list of best bowling figures in Test cricket when he went to take 9 wickets while conceding just 57 runs in 16.3 overs during his bowling spell against the South Africans.

Sri Lankan spinner Muttiah Muralitharan once again features on the list of best bowling figures in Test cricket as he went on to take 9 wickets against England in their Test match at the Oval. Having bowled 54.2 overs with 27 maidens, Muralitharan dismissed 9 English batsmen giving away just 65 runs at an economy of just 1.19.