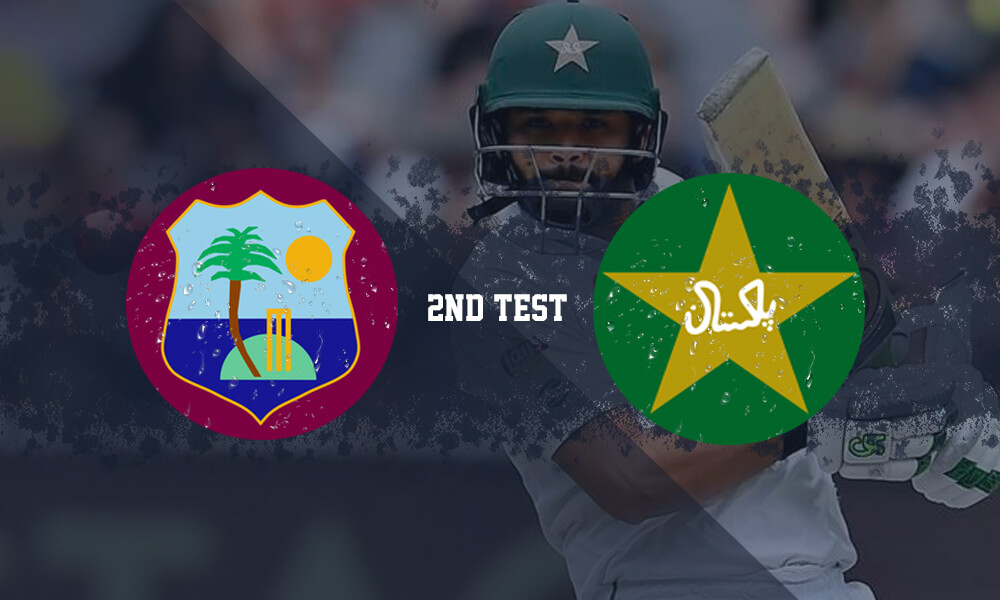 It will be West Indies vs Pakistan, the 2nd Test of a two-match series on Pakistan’s tour of West Indies on August 20, 2021, in Kingston, Jamaica. West Indies won a thrilling one-wicket victory in the first match at the same venue. In this article, we preview the 2nd match and forecast the outcome.

The two sides last met in the first Test match that began at the same venue on 12 August. Pakistan batted first and in the absence of substantial partnerships – barring one of 85 runs for the 6th wicket — were bowled out for 217. Fawad Alam made a top score with his 56, while Babar Azam made 30. For West Indies, Jaden Seales and Jason Holder took three wickets each. While Kemar Roach grabbed two, Kyle Mayers took one.

When West Indies replied, they were reduced to 100/5 before the innings was revived with a 96-run stand for the 6th wicket. A few late-order cameos helped the hosts edge past the Pakistan score to reach 253 all out. Brathwaite made a top score with 97. Shaheen Afridi took four wickets while Holder contributed 58. For Pakistan, Shaheen Afridi was the highest wicket-taker with four. M Abbas took 3, while Faheem Ashraf and Hasan Ali took one each.

Pakistan’s second innings did not begin well and they found themselves reduced to 4/65 before a mini rescue act in the form of a fifth-wicket stand of 56 runs. Inexplicably, from the relative comfort of 121 for 4, Pakistan collapsed to become all out for 203, in which Babar Azam made 55, a top score. For West Indies, Jaden Seales took 5 for 55. Roach took three, while Mayers and Holder took one each.

Chasing 168 to win, West Indies 3 wickets for just 16 runs before being rescued by a 68-run stand for the 4th wicket. However, they lost regular wickets thereafter to be reduced to 151 for 9. Needing 17 to win, Roach and Seales survived tense moments to get West Indies past the target. Blackwood top scored with 55. For Pakistan, Afridi took four wickets, while Hasan Ali took three and Ashraf accounted for the remaining two.

Pakistan have registered a 4-3 h2h advantage over West Indies in the last 7 matches played between the sides.

In our West Indies vs Pakistan Test prediction, we believe that Pakistan will bounce back to beat West Indies in the 2nd Test in Kingston, Jamaica.

We have made our WI vs PAK Match Prediction, disregarding the events of the first match, which, in our opinion, was an aberration. We expect senior Pakistan players skipper Babar Azam, Azhar Ali and Abid Ali to play to their potential.